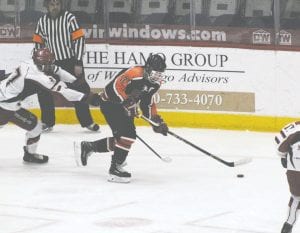 Brendan Ogle got the first goal assisted by Nik Calugaru before Calugaru got his own tally with help from Jake Castles. Kam Houle then rippled the mesh off a feed from Dylan Stankewicz and Mitch Carlson and Castles buried one from Cody Harburn.

“I’m proud of our team’s performance,” said SCF coach Ben Guzak. “They all continue to work hard and improve.”

SCF looked completely unstoppable at the Polar Palace against Lapeer last Wednesday in a 13-4 rout. Calugaru scored the first goal for SCF, with help from Harburn before Castles netted one on an assist from Calugaru. Kam Houle and Ogle helped set up Stankewicz’s goal before Stankewicz scored again, this time from Mitch Carlson.

Harburn then got one of his own, assisted by Calugaru and Houle tallied with the help of Noah Somers. Castles got his second of the night from Noah Bartkovich and Harburn before Harburn rippled the mesh, which was set up by Mitch Carlson and Nick Carlson.

Calugaru got back in on the action with helpers from Houle and Stankewicz and then Houle buried one from Mitch Carlson and Preston Weisberg. Houle continued his impressive night with another goal, this one from Ogle, and Mitch Carlson scored with help from Austin Sanborn and Harburn. Stankewicz got the final tally of the night, assisted by Hould and Somers.

“Our boys played well and continue to improve,” said Guzak.

SCF was at Iceland on Wednesday, following press deadlines, against Freeland. – B.P.