SCF puts up four in high-scoring loss to Swan Valley 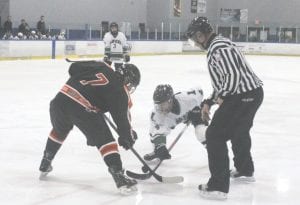 SCF’s Mitchell Carlson takes the faceoff against Lapeer at the Polar Palace.

Jake Castles was the first to score for SCF with the help of Nik Calugaru and Seth Crompton. Dylan Stankewicz netted an unassisted tally and Kam Houle scored with the assistance of Crompton. SCF’s final goal was scored by Noah Somers, assisted by Calugaru.

“Our boys played hard and just came up a little short as they continue to improve,” said SCF coach Ben Guzak.