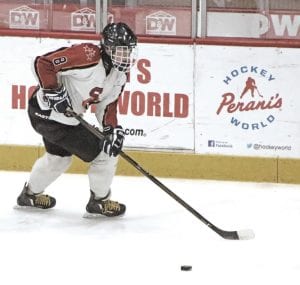 FLINT – The Swartz Creek/Clio/Flushing hockey team saw its season come to a close with a 7-5 pre-regional playoff-opening loss to Alliance (LakeVille/Goodrich/Almont/Imlay City/North Branch) on Tuesday.

SCF had a commanding 4-1 lead at one point but was unable to secure the victory. Jake Castles netted SCF’s first two goals of the game and Nik Calugaru added another as SCF took a 3-1 lead into the break. Its lead extended to 4-1 when Calugaru buried yet another.

Alliance began to creep back into it with three goals in the second period. Nicholas Carlson notched SCF’s final goal in the third, but two goals from the Alliance in the third sealed it off.

Alliance now moves on to face United (Kearsley/ Brandon/Holly/Lake Fenton) in the regional semifinal after they topped Grand Blanc 4-3 in overtime.

SCF capped off the regular season at the Dort Federal Event Center on Saturday with a back-andforth 4-4 tie with Grand Blanc. Seth Crompton was the first to score, assisted by Dylan Stankewiscz and Noah Somers. After Grand Blanc tied it, Jake Castles took the lead back with the help of Calugaru to end the opening period with the lead.

Stankewiscz buried another with the assistance of Cody Harburn and then Stankewicz scored the game-tying goal in the third, assisted by Crompton. After a scoreless eight-minute overtime, the game ended in a draw.

SCF welcomed Lapeer to Iceland Arena last Wednesday and knocked off the Lightning for a 10-6 win. Kam Houle was the first to light the lamp from Stankewiscz and then Calugaru scored, assisted by Crompton. Stankewiscz then notched one of his own with the help of Brendan Ogle and Castles.

Stankewiscz then buried another from Cody Harburn and Houle and Calugaru recorded his second of the night with the assistance of Crompton and Nathan Schwartz. Houle added another tally before Crompton netted one from Calugaru and Ogle.

Calugaru completed the hat trick on a feed from Ogle and then added his fourth of the night from Noah Somers. Castles rippled the mesh, assisted by Stankewiscz and then Stankewiscz got a hat trick also with help from Castles.