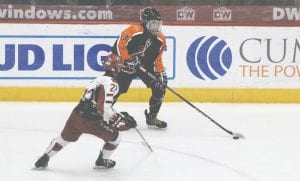 SCF’s Dylan Stankewiscz controls the puck on the power play at the Grand Blanc Tournament.

Houle then fired one home with the assistance of Ogle and Nick Carlson and Castles got an unassisted tally. Calugaru then scored the next two goals, the latter of which was assisted by Stankewiscz. Stankewiscz then tickled the twine, assisted by Calugaru, then he did it once more, helped by Calugaru and Ogle.

Ogle then netted one, followed by goals from Houle and Calugaru.