Scholar-Athletes, Teacher of the Year recognized 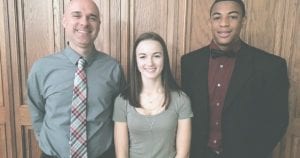 FLINT TWP. — Carman-Ainsworth student scholar-athletes and staff were honored at a luncheon and awards ceremony held on Wednesday, April 26 at the Horizon’s Conference Center in Saginaw, according to a press release. Two students and a teacher from each member school were recognized at this program.

This year’s C-A honorees are:

Teacher of the Year –Matt Young

Arianna Vantine was described as a remarkable student and athlete who excelled in her class work, and also extracurricular activity. She is a member of the National Honor Society, Health Occupations Students of America (HOSA), and the Carman-Ainsworth Blue Brigade Band. While balancing school work and extracurriculars, Arianna has held a job as a waitress at Papa Joe’s in Durand for the past two years. Throughout her years at the high school, she has maintained a 3.927 GPA and is ranked 12th in her class.

On top of her school work, extracurriculars, and work, Arianna has been the starting keeper for the CA Varsity soccer team for four years. She is also a three-year captain for the CA Varsity Soccer team. On the off season for soccer, Arianna ran Varsity Cross-Country for CA.

“I have gained many skills by participating in athletics, extracurriculars, work, and schooling,” she said. “I have learned how to properly manage my time so I completed all of my school work and still have time to do all the extracurriculars that I wanted to participate in. Also, being a three-year Varsity Soccer captain, I have learned how to be a leader and communicate with my peers. It brings me joy that I am the one that my teammates look up to, come to for help with homework, or just if they need a friend. I will be using these skills when I attend Michigan State University to study Veterinary Medicine in the fall.”

She is the only daughter of Heidi Lewicki and Robb Schultz/

Justin King was lauded for “an excellent academic and athletic career at Carman-Ainsworth High School. He has played Varsity Basketball and Baseball for Carman-Ainsworth and was a key part of those teams each year. In 2017 Justin and his teammates on the Varsity Basketball team were able to secure the Saginaw Valley Conference championship. Each year while on the Baseball and Basketball team Justin was also able to be selected to the Saginaw Valley All-Academic Team.

Justin has been a member of Student Council since his freshman year and a member National Honor Society from 2012 to 2017. He also has a 3.906 cumulative GPA and is currently ranked 13th in his graduating class. In addition to volunteering in various areas of the Carman-Ainsworth community helping out at local elementary schools and the Flint Public Library, Justin is also enrolled in his school’s Accelerated Graduation Opportunity Program.

“From the beginning of my journey as a student at Carman-Ainsworth, I never could have imagined how many life skills I would end up learning.” He said. “By being a student-athlete I know that there is more expected from me, both on the court/field and in the classroom. Doing these things simultaneously throughout my high school career has taught me how to be responsible, manage my time, and communicate effectively. These skills will be essential for me if I want to do well as I transition into my college life. My current career goal is to become a Sports Agent. I plan go to a prestigious university with an excellent undergraduate and graduate business program in order to obtain the proper credentials.”

Justin is the second child of Tony and Beverly King of Flint.

Matt Young, 2017 Teacher of the Year, is finishing up his 16th year as a math teacher at C-AHS and has worked tirelessly to improve math instruction for his math students by providing them with engaging activities, stellar questioning and continual checks for understanding. He is a master of instructional technology and regularly uses apps on his IPad, instructional apps on the Chrome Books, and is an avid user of Smart technology with his white board to increase engagement of students. He has attended a number of Math workshops as part of the i3/STEM initiative including Numeracy, Enhancing Learning for Students with Learning Difficulties, and the What is Math? series, and has implemented a number of strategies into his instruction.

Young is credited with having a great sense of humor and regularly makes math jokes or challenges students to solve a math puzzle to grab their attention.

Young also is highly respected by his colleagues. He is also involved in a number of extracurricular positions, including coaching 7th grade boys’ basketball at C-A Middle School in the winter and coaching the JV boys golf team for CAHS in the spring. He has coached Upward Basketball for the past eleven years with younger students through his church.