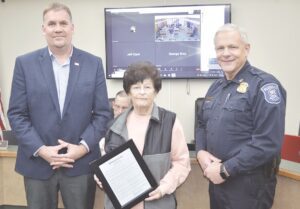 FLUSHING — For 16 years, school crossing guard Ann Marie Parker was a fixture on several busy street corners in Flushing, helping children make it back and forth safely from home to school.

In recognition of her service, the City of Flushing presented Parker with an official proclamation and plaque at the Nov. 16 Flushing City Council meeting.

Parker began as a crossing guard with the city in 2005 and mostly patrolled crossings near St. Roberts Catholic School and the corner of McKinley Road and Coutant Street. In addition to her regular duties, she took on a supervisory role for the city’s crossing guards, providing schools schedules, coordinating substitutes during absences and keeping other guards apprised of school schedules and closings.

Flushing Police Chief Mark Hoornstra praised Parker for her dedication to the job, even when she spent countless days in inclement weather or had to deal with aggressive motorists. She was also praised for contributing to the betterment of the police department and Flushing Community Schools by offering a level of comfort and security for children and parents in the city. — B.G.