Board receives update on bond projects 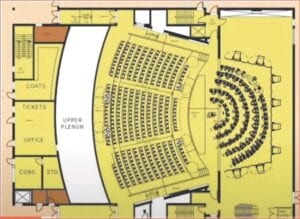 The layout of the inside of the new performing arts center. Photos screenshots from DTV

DAVISON — Work is expected to start next summer on a new performing arts center at Davison High School, but in the meantime, there are plenty of other bond-related projects to be completed before that work can begin.

Superintendent Kevin Brown reported to the Board of Education, Dec. 7, that construction of the new auditorium will begin in the summer of 2021. Before that work can take place, however, he said several other projects will need to be completed.

“Before that new auditorium can be built, we still have some work to do here asbestos abatement in the high school must be completed,” he said. “The first round of abatement was done back in the spring and into the summer of this school year.”

For this round of abatement, the board approved the contractor with the lowest bid, Certified Abatement Services. Brown said they did the first round of abatement and he praised the work they did. This phase of the asbestos removal will incorporate the entire lower level of the high school including the cafeteria area and the Athletics Meeting Room.

A look at the exterior of the proposed performing arts center at Davison High School.

The low bid was from Certified Abatement Services at $592,000. The plan is for the work to take place during spring break or at the end of the 2020-21 school year.

Next will be the Put Back Project which is the reconstruction of everything removed during the abatement.

The low bids for this were Resurrection Carpentry at $124,000 for the reconstruction; Wolverine Fire Projection for the fire suppression system at $76,900; MJ Mechanical Services for $45,800 for all the heating and cooling duct work; and Metcalf Electric for the electrical work at $185,775. The board approved all four low bids.

Brown said the new bus lot at Cardinal Station, the new building acquired by the district off Lapeer Road, must be done before work on the auditorium, to be located on the southeast corner of the high school, can begin.

The bus lot will need to be moved from its current location to Cardinal Station. Brown said the land has been cleared behind the building on Lapeer Road and a second drive into the property will be placed off Alger Drive, which comes in off Lapeer Road to the high school.

Kennedy Excavating was awarded the low bid for the bus lot construction at a cost of $962,557.

Brown then presented a video made by Randy Scott, the instructor for the DHS television broadcasting program DTV, which was an overview of the plans for the new auditorium/ performing arts center as told by the teachers who have worked with architects Kingscott Associates to design the project.

“The district’s music teachers have all been very involved with Kingscott Associates, our architecture and design firm for the new auditorium, and they are almost done with the complete design phase of that new auditorium,” said Brown. “The teachers have been so involved in the design they can speak to the project just as well as the architects and engineers.”

James Schuster, director of the DHS band and orchestra, addressed the board via the DTV video and gave praise for the proposed project.

He said the new auditorium will increase the band and orchestra’s space from its current 1,700 square feet to 3,000 square feet, almost doubling in size. The students will be able to access the building from inside the music room and there is east access to the parking lot to get to and from festivals and marching contests.

Schuster said there will be more storage space than ever before with moveable storage space and lockers on the outside so students can keep their instruments there in their own personal space rather than having them left on the floor.

Michelle Wilson, Gates choir and theater director, said all of the district’s music teachers met with Kingscott Associates and discussed the design.

“As teachers we were excited to talk about our dreams for this new space,” she said. “We were thrilled to see the possibilities we’ve talked about for years become a reality.”

DTV’s Randy Scott showed the high school’s current weight room which will be repurposed into a studio for DTV, putting it in the area between the existing gymnasium and the proposed entrance to the new performing arts center.

“This puts us between where most of (DTVs) activity takes place – the gym or auditorium,” said Scott. “What a difference it will make not having to move the camera from one side of the school to the other. This is making the situation a lot better for us. This room right here has so much space.”

He said the room will be divided in half, creating a newsroom on one side and a studio on the other. The present girl’s locker room will be repurposed into a control room for DTV with glass panels to allow a “Good Morning America” feel where people can look in on the control room and studio from the windows.

Further additions will include a scene shop with garage door for the performing arts center where props can be built, and sets moved from the scene shop to the auditorium. Having a room for the prop construction will also minimize any sawdust and other mess from getting into the rest of the auditorium.

“I think all of you have seen the excitement and enthusiasm in our teachers over this entire process. They really do feel like they were an integral part of the design, and of course they were,” said Brown. “That’s what gives them the comfort to talk about what this new facility will eventually look like.”

Brown said John Davis, lead architect on the project from Kingscott Associates, told him in 35 years of designing these facilities he’s never seen a group of teachers more involved, more knowledgeable and with more expertise who are more willing to participate in the design work as the Davison Community School staff.

“They were very impressed with our teachers,” said Brown. “And it will be an amazing facility.”

The performing arts center will cost about $18 million of the overall $71.39 million bond approved by Davison voters in March.