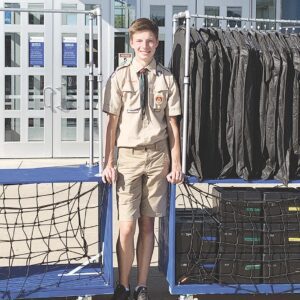 FLINT TWP. — As a member of the Carman-Ainsworth High School Blue Brigade Marching Band, Alex Wickham is quite familiar with the band’s aging hat and uniform racks.

“They’re probably 15-years-old or even older,” said Wickham, who’s a senior at Carman Ainsworth High School and a French horn player in the band. “I thought it might be nice to design new racks that combined the hats and uniforms. That way, it would be easier to transport them when we travel for performances and competitions.”

On Sept. 18, Wickham led a group of volunteers from the Blue Brigade and Troop #122, a Boy Scout troop in Swartz Creek, in building the new racks for his Eagle Scout project. About 15 volunteers gathered outside Carman-Ainsworth High School on a sunny day to assemble and outfit the racks that the Blue Brigade expects to put to immediate use.

In addition to performing at high school football games and other school events, the Blue Brigade is a member of the Michigan Competing Band Association, which hosts competitions throughout Michigan each fall. 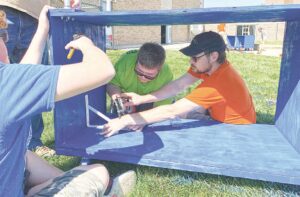 Wickham, who has been involved in Scouting since first grade, started as a member of Cub Scout Pack #110 at Randels Elementary School and then at Troop #122.

In planning for his Eagle project, Wickham approached the United Way of Genesee County for funding. The agency provided funds as part of its Youth Genesee Serves (YGS) initiative to the Carman-Ainsworth Cavalier Band and Orchestra Boosters, which served as fiduciary for the project. YGS engages youth ages 5-18 in youth-led service projects, providing them with skills needed to succeed in work, school and life. — B.G.