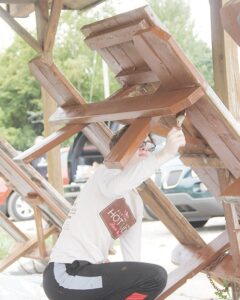 Volunteers were hard at work Sept. 12 at Kelly Lake in Burton as part of Brandon Craig’s Eagle Scout project to paint and re-stain picnic tables, pavilions and a bicycle rack at the park. Photos by Gary Gould

BURTON — A group of volunteers led by a Boy Scout spent Sunday painting and re-staining picnic tables, pavilions and a bicycle rack at Kelly Lake as part of an Eagle Scout project.

Scout Brandon Craig, a senior at Davison High School, led members of Super Troop 178 from Davison and other volunteers in a day long clean-up effort to spruce up Kelly Lake Park, 4345 Lapeer Rd.

Craig said he decided to do something in Burton instead of Davison for his Eagle Scout project, being that he lives in Burton, but attends Davison Community Schools.

“I come here a lot and saw that the picnic tables were chipped and peeling,” said Craig. “I thought, ‘why not do this?’”

It started with the picnic tables, then went on to include some parts of the pavilions, then he included a bike rack at the park and finally, he decided to add the faded Kelly Lake sign that sits out on Lapeer Road.

He led a group of about 10-11 volunteers Sunday to get as much of the work done as they could. He said they’ll probably be back to do any touch-up needed and he added he has a friend who will paint the sign because she’s good with small details and printing. 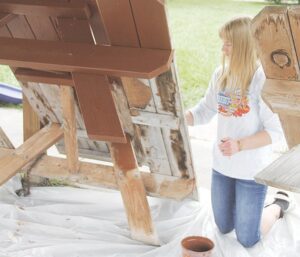 A scout since the first grade, Craig said he and the troop held a pop can drive which raised most of the money needed for the project. He also said they got a lot of help from Home Depot, 4245 E. Court St.

“They gave us a lot of the small stuff,” he said. “We got everything from there, so it helped a lot.”

Brandon recently proposed doing his Eagle Scout project at Kelly Lake to the Burton Parks and Recreation Commission, where his father, Jim Craig, is a member of the board.

Jim Craig said the scouts wanted to do more with the pavilions, but that work will be left up to the Burton Kiwanis Club, who helped fund the construction of both pavilions’ years ago.