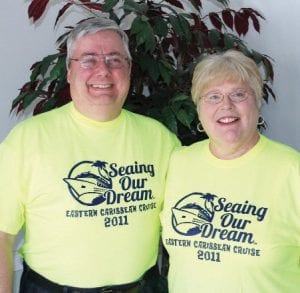 Patty and Terry Horvath sporting their bright green volunteer T-shirts they had made for their “Seaing Our Dream” cruise where they helped book and plan a cruise for 51 visually impaired individuals.

GRAND BLANC— For most people, seeing is believing. Yet, a group of 51 visually impaired individuals would disagree after returning home from a tropical vacation where they witnessed their dreams come true through the simple touch of caring hands.

The group, along with seven volunteers, set sail on Feb. 12 for a sevenday Eastern Caribbean cruise aboard the 3,600 passenger Carnival Dream all because of the hardwork and dedication of Grand Blanc residents Patty and Terry Horvath.

Patty is used to planning and booking the perfect cruise vacations for others as she is the founder of her very own travel agency, Best Cruises and Tours.

“I love cruises,” Patty said. “So I started Best Cruises and Tours in 1998 and specialize in booking cruises for others. Business was slow at first just booking for family and friends, but over the years it has really grown through word of mouth.”

Despite the years of experience and personal knowledge on cruises, these last two years proved to be challenging for Patty and her husband, Terry, as they spent much of their time planning and booking a cruise for the visually impaired. 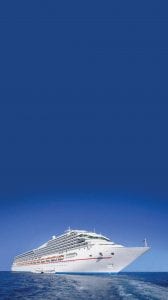 “The blind do OK on cruise ships, but they don’t get off the ship,” Patty said. “In order for them to get off the ship they need the help of a sighted person. So we really saw a need for this and really wanted to provide the blind with the full cruise experience.”

The Horvath’s began advertising at different venues to see if anyone was interested in such a trip and Terry even threw the idea out while attending a conference for the American Council of the Blind (ABC).

“After the conference there was still a lot of people in the room and I started talking about how we work in the travel business and were thinking about organizing a visually impaired cruise trip,” Terry said. “I asked to see if anyone was interested and this one guy looks at me and says. ‘yeah, in my dreams.’ Things got really awkward after that so I dropped it not really knowing what the problem was.”

As Terry would later find out, about 70 percent of the blind never get a fulltime career so paying for a cruise is difficult for some of them.

“Once we found out about the financial difficulties, I booked the cruise a good two years in advance to keep the prices down and then we started a payment plan so it could spread the cost out for those that needed,” Patty said.

“Most of the people that went were actually from Philadelphia, and that was interesting because 95 percent of them had never met us and they were putting their faith in us and trusting that someone would be there to pick them up from the airport,” Patty said.

Although admittedly a lot more work than they had anticipated, Patty and Terry both said the experience was very rewarding and one they would possibly consider doing again some day.

“Every day it was like working six to midnight making sure they all got to do what they wanted and that we got them back to their rooms,” Patty said. “We called our group the “Seaing Our Dream” cruise team and it was very gratifying knowing they got to experience something really nice like that.”

Terry said he and Patty arranged for the group to go on custom tours where they would get to experience the history, culture and shopping each stop had to offer. Terry said the welcoming arms of those at each of the destinations were “fantastic” and said Carnival, the locals, airplane lines and hotel chains all really stepped up to the challenge and made the trip enjoyable for all.

“A lot of our group told me they had a great time, and Patty and I had a great time too,” Terry said. “I tip my hat off to the companies involved in this, every one was very accommodating and very helpful.”

Patty agreed stating she “could not think of one bad thing to say” about the organizations used in planning and said the overall trip was a complete learning experience for her.

“If we ever do this again there are a lot of little things that need to be changed,” Patty said. “It was a lot of planning, but it was nice to be able to step up and offer support to those that needed it.”

For more information on Best Cruises and Tours, call 810-953-0180 or visit www.bestcruisebookers.com.