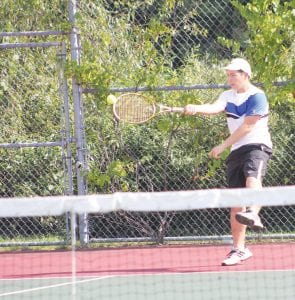 No. 2 Singles player Vlad Li is one of six Carman-Ainsworth seniors who played their last high school match last Thursday in the regional tournament.

MIDLAND – Carman-Ainsworth bid farewell to the top six players in its tennis program last Thursday, as the Cavaliers saw their season end in the Div. 1 regional tournament at the Midland Community Tennis Center.

All four singles flights and the No. 1 Doubles flight played their last high school matches and bowed in the first round of the tournament.

The Cavaliers finished ninth with no points to end a season in which they never fielded a complete lineup. Carman-Ainsworth defaulted at Nos. 3 and 4 Doubles.

Only the No. 2 Doubles team of sophomores Christian Williams and Daniel Reese is eligible to come back next year.

Grand Blanc won the regional title with 28 points, host Midland was second with 20 and Traverse City Central also qualified for the state tournament with 19 points.