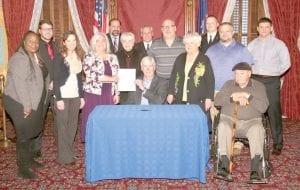 The family of fallen soldier Sgt. Joe Johnson was on hand to watch Governor Snyder sign legislation naming memorial highway in his honor.

MUNDY TWP. — A portion of Highway US-23 will be named in honor of Sgt. Joe Johnson under legislation signed Thursday. March 30, by Gov. Rick Snyder, according to a press release. Sgt. Johnson, a 2004 graduate of Carman- Ainsworth High School, was killed while serving in Afghanistan on June 16, 2010.

“Sgt. Johnson is a true American hero who made the ultimate sacrifice in order to protect and defend our country,” Snyder said. “Naming this portion of highway in his honor is a symbol of our gratitude for his selfless service and will be a constant reminder of his legacy that will carry on for generations to come.”

Senate Bill 34, sponsored by state Sen. Jim Ananich (D–Flint), is now Public Act 19 of 2017. The portion of highway on US-23 is in Genesee County from Bristol Road to Thompson Road. Dennis Johnson, Sgt. Johnson’s father, drives that stretch of road every day on his way to work.

Sen. Ananich hosted Johnson’s family at the Capitol for the bill signing to memorialize their son.

“Today was a very special day for all of us,” Sen. Ananich said. “It was a privilege to have Sgt. Johnson’s family here to watch the bill be signed and to reassure them that the state will never forget their son’s sacrifice. Now, whenever any of us drive on that road, we will think of Sgt. Johnson and all he gave for us.”

His mother, Teri Johnson, has advocated on her son’s behalf to ensure he is properly honored, and her work inspired Sen. Ananich to sponsor the bill.

“Joe will never be a memory,” Teri Johnson said. “By naming this stretch of highway after him, people are going to say his name and he will never fade. They say that a man can never die while his name is still spoken, and our Joe will never die.”

Sgt. Johnson was born in Flint. He joined the Army in 2006, two years after graduating from CAHS, and was deployed to Afghanistan three years later. He was killed when insurgents attacked his vehicle with an improvised explosive device.