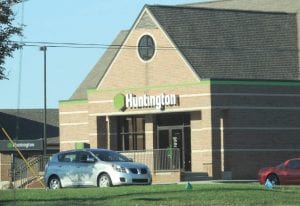 Bank of America signage on the building and ATM machine were replaced with Huntington Bank insignia, as the Miller Road branch became one of 23 in Michigan to change hands in mid-September.

FLINT TWP. — Temporary signs draped over the door and ATM machine were the first indication that Bank of America, 4584 Miller Road, was changing brands.

Huntington announced the acquisition on April 20 – a move that has increased its number of branches in Michigan to 184, including more than 40 locations within Meijer stores.

“Huntington’s Michigan customers will now enjoy more convenience and accessibility to our 700 plus branch network,” said Steve Steinour, chairman, president and CEO of Huntington, in the press release.

“Our new customers can now sign up for one of Huntington’s innovative products including the Voice Credit Card® and Asterisk Free Checking® an account that has no minimum balance requirement and comes with 24-Hour Grace ® overdraft protection fee relief. New small business customers can also begin working with Huntington’s business bankers, who have helped the bank become the largest SBA 7(a) lender in the country in number of loans as of the third quarter of the Small Business Administration fiscal year.” 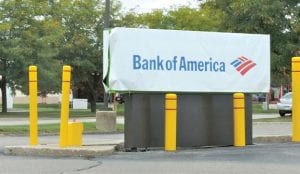 Huntington’s conversion of its newest Michigan branches comes at a time of ongoing Michigan growth for the company, notably with the Meijer in-store branch expansion launched in 2012. Huntington also announced in late 2013 a partnership for the Pure Michigan Micro Lending Initiative that will create Huntington-backed community microlending partnerships throughout the state. Huntington has also exceeded a $2 billion commercial and small business lending goal established for the state in 2011 ahead of its scheduled commitment.

Additionally, Huntington recently donated $250,000 to support the American Red Cross, Southeastern Michigan Region, in its efforts to provide food and other needed services to those Detroit-area residents affected by the recent devastating floods.

For more information on Huntington products and services, customers can call 1-800-480-BANK (2265) or visit www.Huntington.com.

The Miller Road location has undergone several changes of ownership in the past 18 years or so. Previously, it also was a Standard Federal branch, a LaSalle Bank, a Michigan National Bank Branch and most recently Bank of America.