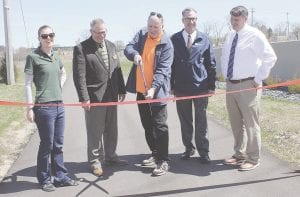 FLINT — A new segment of the Genesee Valley Trail opened Wednesday, running through the former Chevy in the Hole site and connecting with the Flint River Trail.

At a ribbon-cutting ceremony on Wednesday, Joe Krapohl, president of the Genesee County Parks & Recreation Commission, said the new section at Chevy Commons is part of the largest nonmotorized trail system in the state of Michigan.

“We have a multitude of recreational opportunities for the people of Genesee County,” he said. “We’re extremely pleased with the partnership and help we get bringing this to the people of the county.”

The Genesee Valley Trail begins at Genesee Valley Mall in Flint Township. The new 1-mile section extends the trail from Chevrolet Avenue through Chevy Commons, across the confluence of the Flint River and Swartz Creek, past former Chevy Factory Two and on to Factory One, where it connects with the Flint River Trail. The Flint River Trail runs through downtown Flint to its current end point at Vassar Road, making the distance of the connected stretch about 15 miles. 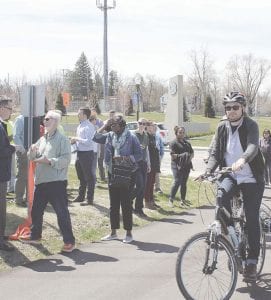 The new trail section is part of Phase 4 of a five-phase plan to rehabilitate the former Chevy in the Hole property, which was the manufacturing center for Chevrolet Motors in the early 1900s and the site of the Historic Flint Sit-Down Strikes in 1936-37. Kettering University, adjacent to Chevy Commons, donated the land.

Phase 5 will include a parking lot, more walking trails and possibly a sledding hill.

The entire project got under way when the City of Flint received a $1.6 million U.S. Environmental Protection Agency (EPA) revolving loan cleanup sub-grant to address contamination at the former industrial site. The money was used to construct the initial phases of a landscaped cap on the land with plans to rehabilitate the area and convert the grounds into a 60-acre park.

June said the cost of the new trail segment was $1.6 million.

“There were bridges we had to build that were quite expensive,” he said. “State and highway funding rules require that we spend money on nonmotorized transportation. We’ve assembled quite a few funding sources because the county doesn’t really have the funds.”