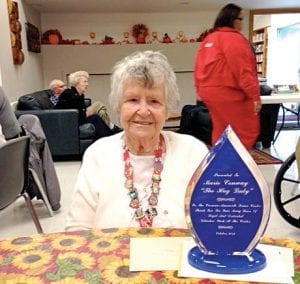 Marie Conway recently was honored as Volunteer of the Year in recognition of years of service to the Carman-Ainsworth Senior Citizens Center.

FLINT TWP. — A faithful volunteer is a treasure beyond measure and worthy to be praised. For that reason and others, the Carman-Ainsworth Senior Citizens Center recently set aside an occasion to honor one of its own as the Volunteer of the Year.

“Marie is known as our Hug Lady,’’ said Pam Luna, interim center director. “She’s here every day brightening all of our lives.”

Conway helps with lunch in the kitchen and through the years has performed many duties, Luna said. She also served many years on the center’s Board of Trustees, before stepping down in 2012.

Conway, who will turn 89 on December 14, had seven children who all graduated from Ainsworth High School, said her son Don Conway, a former member of the C-A Board of Education.

Their mom always volunteered her time to the schools, sports organizations,

“With seven children, there was little extra money to go around, so she volunteered her time as a way of giving back to the community,” he said.

After raising her children, Marie Conway and her husband moved south for a while to enjoy retirement. She lived in Valdosta, Georgia until her husband passed away, then moved briefly to Sebring, Florida to care for two of her brothers, Don Conway said.

That’s where she was introduced to and fell in love with the Sun Room, a local senior center.

After her brother’s passing, she returned to Flint. At first, she was reluctant to try the C-A Senior Center but once she did she fell in love with it too, Conway said. She volunteered 5 days a week until the last couple of years when she dropped down to 4 days.

“She loves the center and the people there,” Don Conway said. “She refers to them as her second family. It keeps her busy, and has kept her vibrant.”

“As her children, we are all extremely happy with the opportunities the Carman-Ainsworth Senior Center have provided our mother. Her involvement at the C/A Senior Center have kept her very active, and to a large part has added years to her life. We are very thankful as well to the administration, and the people who frequent the center for being such an important part of our mother’s daily life.”

Marie Conway was born and raised in Braintree, Massachusetts and moved to Flint during World War II with her husband Robert Conway of Flint, after he was discharged from the Marine Corps.