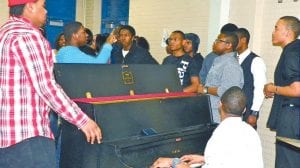 A PROUD TRADITION CONTINUES — Rehearsing for an upcoming Black History Month Concert at 7 p.m. on Feb. 10, the Carman-Ainsworth African American Students Association Gospel Choir includes alumni who come back each year to participate in the event. A special luncheon also will be held the same day at 2:45 p.m. and will feature guest speaker Isaiah Oliver, a Workforce Development Specialist at Mott Community College who won election last year to the Flint Board of Education. Chane Clingman, AASA advisor, works with the students each year to host the Black History Month events. The Mission of the C-A African American Students Association is to “promote positive behavior, raise self-esteem, and enrich the school and community through education, outreach, and self-discipline.”

FLINT TWP. — Differences between landlords and tenants are common and the township’s oversight of the Senior Citizens Center on Graham Road apparently is no exception.

Last year, the two parties engaged in a year-long standoff over a new lease before coming to terms in September along with a reorganization of the senior governing board and adoption of new bylaws.

Now it appears that slow repairs are at issue.

McClung said the township was notified about the hot water problem on a Tuesday morning and it was not fixed until Thursday afternoon.

“I would like to say thank you but it still is not quick enough,’’ McClung said.“ If the hot water was out in the restroom here (at the township hall), I guarantee you it would be fixed by the end of the day.”

Still he said it was record time, compared to a previous problem with faucets and toilets in the men’s and women’s restrooms that took several months to repair.

He called for a better system to get problems repaired quicker.

Similar comments were expressed in November by Ralph Lewis, also a senior center executive board trustee.

The senior center and library average over 150 people a day, Lewis said.

He also asked why the senior center director cannot call for service when emergency repairs are needed then send the bill to the township..

Township Supervisor Karyn Miller responded to Lewis that center director Linda Moore has been authorized in the past to call for help on urgent matters.

She also noted it did not take a long time to repair the problems mentioned but to order the parts.

Tracey Tucker, the township’s economic enhancement director who handles repair complaints at the senior center, also said she has responded immediately when made aware of problems.

Tucker said she has no control over repair people who don’t show up, which was the case with the hot water problem. Also repair delays due to having to order parts is beyond the township’s control. But the types of faucets used in the restrooms have now been upgraded to hopefully avoid future problems, she said.

Tucker also said that senior center officials should contact her directly when problems arise rather than going through a third party.

Tucker said her parents helped build the senior center which has a reading room named after her father. She said she totally supports keeping the center a safe, comfortable place for seniors to gather.