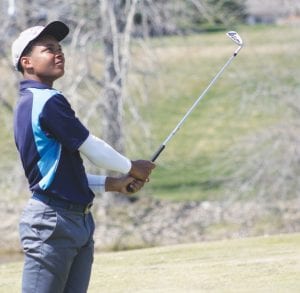 Carman-Ainsworth senior Haywood Petty has come within seven strokes of advancing to the Div. 1 golf regional the last two years. He gets his final chance today.

DAVISON – The district tournament is usually the end of the road for the Carman-Ainsworth golf team every year, but maybe it won’t be for Haywood Petty this time.

The senior has been the Cavaliers’ top player all four years and has come fairly close to moving on in the state tournament, missing by seven strokes the last two years.

The top six teams and top six individuals not on those teams will advance to the regional May 29 at Currie Golf Course in Midland.

Petty’s last chance to be one of those six players might be his best. He has scored in the 70’s and placed in the top 10 of several tournaments this season, including Saginaw Valley League jamborees. Seven of the teams in the district are SVL teams.

“I think his chances are better than 50/50,” said Carman-Ainsworth coach Bob Blaylock. “He’s playing well and really focused for this event.”

Noah Vanderhyde is the only other Cavalier who played in the district last year. The rest of Blaylock’s lineup has Tyson Fields, Kaden Rytlewski and Aaron Floyd.

If Petty gets through to the regional, he could start thinking state. The top three teams and top three individuals not on those teams will advance to the state meet June 5-6 at Katke Golf Course on the campus of Ferris State University in Big Rapids.