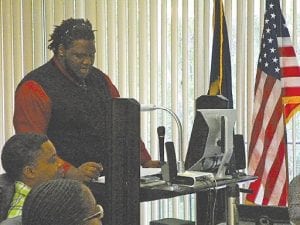 Charvez McClure was chosen to repeat his Senior Exit Presentation for the C-A Board of Education.

FLINT TWP. — “Failure will never overtake me if my determination to succeed is strong enough.” – Augustine “Og” Mandino.

Charvez McClure, a graduating senior at Carman-Ainsworth High School credited that quote with keeping him motivated in school. It kept him going when he was feeling burned out, didn’t feel like getting out of bed to go to school or spending an extra half hour studying or trying to balance sports and a social life, he said.

McClure first saw the quote painted on a wall at a karate dojo when he was in fifth grade and it stuck with him through the ups and downs of growing up.

He used the quote to open his Senior Exit Presentation, which he was asked last week to present again to the Board of Education.

Exit presentations which began April 9 are given by all C-A graduating seniors to highlight their high school experience and outline future goals.

It has become a tradition to have the student senior school board member present his or her presentation to the board but this year McClure also was singled out for his outstanding presentation, said Superintendent Steve Tunnicliff. Senior student board member Whitney Reynolds is scheduled to give her Exit Presentation at the May 21 board meeting, he said.

In his presentation, McClure described himself as a Christian, a brown belt in martial arts, a varsity football player and most importantly “a black male who is going to be successful.”

He outlined his higher education plans to pursue a career as a Forensic (crime-scene) investigator. He chose that career path because he is friendly, cooperative and likes to work with people and solve problems, he said.

“It is important for me to do something that makes things better for other people,” he said.

As a youth, McClure said he has spent time working in the soup kitchen, cleaning up his neighborhood and tutoring younger students.

He also is an Honor Roll student whose ACT test score of 22 qualified him to become a member of the elite Club 21, he said.

As his parting thought, McClure quoted from the Bible Psalms 37:23 which says: “The steps of a good man are ordered by the LORD: and he delighteth in his way.”

McClure said he selected that quote to indicate that “my destiny is already set by God and all I am doing is carrying out the work.”