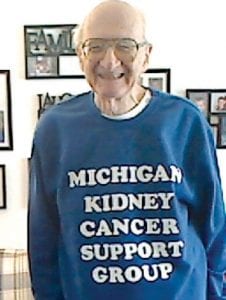 FLINT TWP. — Unlike many technology-shy senior citizens, Frank Friedman, 75, is on YouTube. He’s on Facebook. He’s signed up for Google Alerts, fields hundreds of e-mails a day and uses a variety of media to spread his message about kidney cancer.

Friedman’s passion with the subject began six years ago when his only child, Sammy, died at age 38 from kidney cancer.

It came on suddenly and by the time Sammy was diagnosed correctly the cancer had spread to both his kidneys. He died shortly after.

At the time, Friedman, a retired Mott Community College professor, could not find any local support groups to help him and his wife through the coping process. So he started one.

For the past five years, Friedman, who lives in Flint Township, has taken it upon himself to contact the governor of Michigan to make sure that a proclamation is issued. He then posts copies of it at doctors’ offices, pharmacies, the Genesys/Hurley Cancer Institute and other places around Michigan. He pays out of his own pocket costs associated with his outreach including mailings and refreshments at support group meetings.

At the March support group meeting, Friedman will talk about the latest news in kidney cancer. His planned guest speaker from the Karmanos Cancer Institute in Detroit had to cancel. All meetings are open to the public.

Friedman has other speakers lined up for the next five months including the April meeting when the guest speaker will be Mark Roby, a Birmingham physician who will talk about how he used Holistic Medicine to cure himself of a rare cancer he was diagnosed with in 2002.

Friedman also has a pediatric cancer specialist coming in June to talk about the growing frequency of cancer in children.

But Friedman’s campaign to educate the public about kidney cancer goes on every day. He is connected to numerous organizations and medical facilities that work with kidney cancer patients.

He can quote statistics about people afflicted and even name names of local sufferers.

Wilms’ Tumor, a form of kidney cancer mostly affecting children, is a particular concern of his. His awareness or advocacy of several Michigan cases includes a 14- year-old girl in Fenton, a 3- year-old boy in Davison and an 11-year-old boy near Pontiac.

“I do a lot of work with Wilms Tumor,’’ he said, noting that it is easier to connect with children and their parents than it is to reach adults. But Friedman also regularly corresponds with adults who are at stage four (advanced) of renal carcinoma (AKA kidney cancer). Many people are very private but others like to share, he said.

Friedman keeps track of kidney cancer and general cancer treatments. Thumbing through a thick book of statistics he gets from the American Cancer Society, Friedman informs that there were an estimated 58,240 cases of kidney cancer in 2010 up from 57,760 in 2009.

He maintains contact with online groups including the American Kidney Cancer in Illinois, the Association of Cancer Online Resources, Inc. (ACOR) based in New York and the Action to Cure Kidney Cancer (ACKC) also in New York.

“I’m on e-mail all the time,’ Friedman said, adding that sometimes it takes all day and his wife has to ask him to shut it down.

One of his regular correspondents is an 80- year-old grandmother of a Highland boy whose cancer has metastasized to both kidneys.

He said his pride and joy is an Illinois couple whose young daughter has lost both kidneys to cancer and now needs home dialysis treatments. He met them through ACOR, a free online community for people affected by cancer and related illness.

Then there’s the 21-year-old who finished all but one semester of her nursing degree while battling Wilms Tumor.

Friedman said he also has reached out to two pastors -one in Alabama and one in Colorado – who both are at stage four kidney cancer.

Friedman had contact with Margaret Hussmann, an El Paso teen diagnosed with cancer who wrote a book, “Hope is Here’’ to help other children cope with cancer. Hussmann died in 2009 at age 15. Friedman obtained permission to share pages copied from her book with other people on his contact list.

There are many more stories he has to tell about people he has reached out to.

“I feel like I know these families,’’ he said but stresses that he does not intrude in their lives. He offers prayers, vocal support and general knowledge.

Friedman also steers people to support organizations such as the ACKC – an advocacy group established by kidney cancer patients and caregivers to seek funding for research to find a cure.

Friedman also keeps himself informed by subscribing to Google Alerts and following published information about cancer victims around the country.

As a result of his efforts, Friedman is a walking, talking fountain of information about what is happening in kidney cancer circles.

He knows that the Penn State football team holds a weightlifting event every summer to raise money to support kidney cancer research.

Friedman knows about the upcoming march to Washington March 17-18 sponsored by a consortium of agencies including CureSearch for Children’s Cancer. The Children’s Cancer Awareness and Advocacy Day will bring people together from all over the country to raise awareness and funds for pediatric cancer issues. More information about the march can be found online at www.childrenscause.org/node/140.

Friedman’s support group, formed in April 2007, is the only one in Michigan devoted exclusively to kidney cancer, he said. Other groups dealing with cancer in general include Karmanos and Gilda’s Club in Rochester. Those are on his contacts list too.

People who come to his support group meetings have included a Canton woman who had kidney cancer, a Troy woman who had a kidney removed and a 20-year-old who also lost a kidney.

Friedman said 15 people on average attend his support group meetings. Some return each month and others come only once to find out what they want to know.

In 2009, Friedman spread his technology wings and made several videos about kidney cancer which are posted online on YouTube for dissemination worldwide. To view them, go to www.youtube.com and type Friedman’s name in the search box.

Friedman’s message is that anyone of any age can be affected by kidney cancer and that knowledge is power. And if you have a computer handy, he will be happy to tell you all about it.