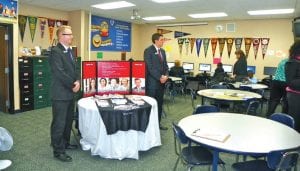 FLINT TWP. — As part of a national initiative to increase the number of Michigan residents with college credentials by the year 2025, Carman-Ainsworth High School hosted its first-ever College Application Week (CAW), Oct. 29 – Nov. 2.

With a special focus on low-income students and those who would be the first in their families to attend college, CAW is an initiative of the Michigan College Access Network (MCAN) and a national movement, said Nancy Galassini, CAHS guidance counselor and event coordinator.

“This is the first time that CAHS has participated in the statewide CAW which, is in its second year,” said Galassini.

A handful of CAHS students have already completed the college application process but CAW aimed for a 50 percent participation rate among seniors, she said.

CAW began in North Carolina as a pilot effort at a single high school in 2005 and has spread to 19 other states. MCAN’s pilot in 2011 began at 40 schools and spread to 85 this year including three in Genesee County.

As a selected host site, CAHS provided seniors and their families with access to college representatives, guidance counselors and computer labs on Monday evening and again from 5-7 p.m. today and 8 a.m. to 2 p.m. Friday Nov. 2.

Vincent Wells and his mother Belinda attended the first session. He wants to become an architect and is considering joining his older sister at Eastern Michigan University but also is interested in the University of Michigan in Ann Arbor and the University of Southern California.

“I want to make sure that he goes outside of Flint because I want him to be able to learn to be responsible on his own,” Belinda Wells said.

By attending CAW and talking to counselors and other resources, Belinda Wells said she now knows exactly what her son needs to do.

Seated side by side at other computer terminals, Julie Lambitz and her son Ethan, pondered online applications for Ferris State University and EMU. Ethan also in interested in Saginaw Valley State University but planned to file as many applications as possible during CAW, his mother said.

Ethan will not be the first in his family to attend college.

“We are just taking advantage of the opportunity to put in as many applications as we can to increase our chances,’’ Julie Lambitz said.

Galassini said that CAHS is a great feeder school to area colleges including Baker, Mott Community College and the University of Michigan- Flint. Many also attend Michigan State University, with SVSU up and coming and EMU not far behind.

Based on informal student reporting, Galassini said that about 37 percent of CAHS go on to two-year colleges and 47 percent to four-year institutions.

But where they go is not as important is that they go.

November 1 was the deadline to apply for certain college scholarships which made the CAW event timely.

Filling out college applications can be a daunting process, Galassini said. Sometimes students who attempt to apply online find questions they don’t know how to answer and put off the process until it is too late. By spring, it is unlikely there will be any scholarships left, she said.

If they chose to, participating students like Wells and Lambitz left their CAW sessions with their college application process completed. The CAHS guidance office secretary was on hand to process transcripts and test scores required with applications, Galassini said.