Seniors will lead Cavs into the ring 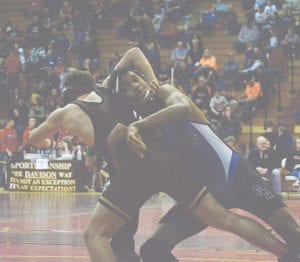 Carman-Ainsworth’s Kenyon Jackson is one of six seniors on the Cavaliers’ wrestling team this season.

According to assistant coach Michael Gross, many of the current crop of seniors are still working into their weight, but are not set into which class they will wrestle. Gross is entering his third season working alongside head coach Tom Weissend.

“As a team, right now, we’re hurting (in the) lower weights,” said Gross. “I don’t have a three-pounder, a 12, a 19 or a 25-pounder. We’re going to void the first four weight classes and that already puts you in a big hole. We’re hoping to be a .500 team. As far as individuals, we’re hoping to get all six seniors through districts and get at least a couple of them to state qualifiers through regionals.”

This will be Lewis’ first season wrestling since his youth. He previously played basketball the past two years, but decided to enter the ring again for his senior year.

“He’s getting back into the swing of it pretty good,” said coach Gross of Lewis. “I’m expecting good things from him.”

Gross also noted that freshman Nathan Taylor will be a newcomer to watch at 215 lbs.

“It sounds like we have a lot with our seniors, but we’re going to be a small team of about 20 kids altogether,” said Gross. “A lot of the big programs we’re looking at (in the league) are pushing 30 strong or more. Having a small team is a good thing and a bad thing. We can really focus in on the kids, but it (can be) a bad thing because you just don’t know where your future is going to be at.”