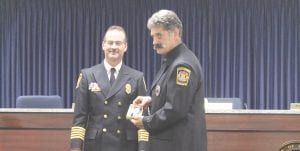 FLINT TWP. — After 23 years as a full-time firefighter, Dan Kelly has been promoted to the rank of captain.

He has also been active with hydrant maintenance and serves as the Hydrant Maintenance Supervisor.

“As we continue to move forward, positive leadership is essential on all levels in the fire department,” said Stadler. “Therefore, I am respectfully requesting that the Township Board of Trustees approve the promotion of Sgt. Dan Kelly to fire captain.”

In addition to approving the promotion of Kelly, the board also approved the hiring of two new police officers.

Shane Henry and Cody Johnson were offered employment with the department, filling two of four openings in the police ranks.

Henry, a graduate of Hill McCloy High School in Montrose, holds an Associate’s Degree in Criminal Justice from Mott Community College and is currently employed by the Oakland County Sheriff’s Department where he has served fro five years.

Johnson is a graduate of Swartz Creek High School and has a Bachelor’s Degree in Criminal Justice from Ferris State University. He is currently employed as a full-time police officer with the City of Flint, where he has served for three years.

Both are set to start their careers at the Flint Township Police Department on Oct. 30.