‘Servant of the people’ gets special send-off 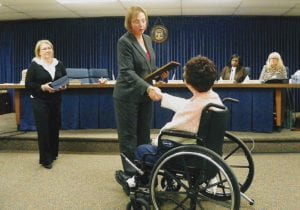 Sandra Wright, who is retiring after five terms in office, received proclamations from township, county and state representatives.

Wright was first elected in 1992 coinciding with the first term of former U.S. President Bill Clinton.

In a State of Michigan tribute to Wright, State Representative Jim Ananich said her retirement marked the end of an era.

He read a proclamation that in part stated: “At a time in our history when local officials face many challenges and changes, Sandra Wright has responded with energy and heartfelt concern for the citizens, businesses and institutions of Flint Township.”

The proclamation further praised Wright for her community leadership and years of service and was signed by the entire Genesee County delegation, Gov. Rick Snyder and the 96th legislature in Lansing.

He also mentioned Wright’s recognition by the Disability Network after she lost a leg in 2009. He said Wright should be recognized as a community leader and not just a politician.

Township Supervisor Karyn Miller and Clerk Kim Courts presented a parting gift to Wright and also a proclamation from the board recognizing her for serving the township with “grace and professionalism,” overseeing many technological advances as her staff evolved from keeping the books by hand to using com-