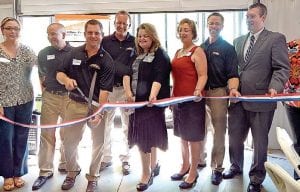 FLINT TWP. — By coincidence, Servpro — a damage and disaster response restoration company — signed up for Sept. 11 as the date to host a Lunch Is On Us business networking event for the Flint & Genesee Chamber of Commerce.

But when realization of the significance of the date set in, they ran with the patriotic theme from the table decorations to the red, white and blue ribbon used in the formal ribbon cutting last week.

Most of the changes involved sprucing up and moving some offices around, said Paul Kerby, business development director.

Owners, Randy Miller and Mike Snyder, are enthusiastic about renovations which come as a result of significant growth and the need for a redesigned space to provide services to customers.

“We are very excited about this expansion and the space it provides for future growth” said Snyder. “Our growth and success is due to the diligent work of our amazing staff and the support of our local community that trusts in our services and brand,” Miller added. 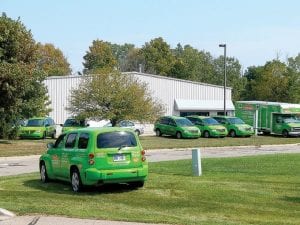 Kerby noted that September is National Preparedness Month – a reminder that terrible tragedies do happen unexpectedly. Sept. 11 made many people realize how unprepared they are for disasters, he said.

Servpro specializes in all forms of disaster clean-up including water, fire, flood, storm and mold damage.

“Like it never happened,” is the motto for the crew that arrives in their distinctive bright green trucks to tackle the restoration process.

A recent false smoke alarm at his home at 3 a.m. a few weeks ago put Kerby in the panicked shoes of many of their customers as he ran down the list of what to do next including safely evacuating everyone in the home.

“What next is the biggest question we hear from a lot of our customers,” said Kerby who counted Flint Township customers among the 170 jobs they handled in the aftermath of the historic flooding event in May 2012.

Servpro which is part of more than 1600 franchises nationwide established in Flint Township in 1997 and was acknowledged last week for its continued growth and decision to remain in the community.

Heather Kale, director of member services for the Flint-Genesee Chamber, praised Servpro as a community player and also led the gathering in a moment of silence in remembrance of the victims of one of the nation’s all-time worst disasters.