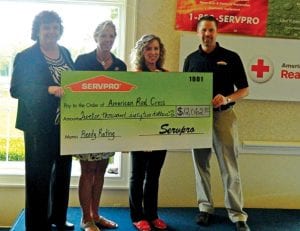 Ready Rating is a program that helps businesses, schools and organizations become prepared for disasters and other emergencies.

As national disasters are becoming more prevalent across the country, local SERVPRO Franchise owners are working together to raise funds that will help communities better prepare for the unthinkable.

“Our teams respond to people in crisis who don’t know what to do next” said owner, Randy Miller. “Supporting the American Red Cross is our way of showing we are committed to helping communities recover quickly .”

“Being prepared and having a plan in place is the key to making a quick recovery” added co-owner, Mike Snyder.

The private event took place on Sept. 25 at Cherry Creek Golf Club in Shelby Township with a check being accepted by Susan Urban, representative of the American Red Cross, Southeastern Michigan Region.

“We at the Red Cross thank the people whose generosity made this golf outing such a great success! We are proud to count SERVPRO as our partner both here in Michigan and throughout the country,” said Urban. — G.G.