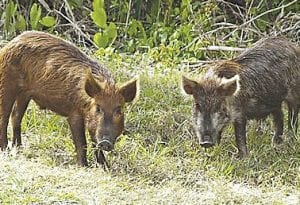 Feral pigs are an invasive species in the state of Michigan.

STATEWIDE — False rumors are circulating about the manner in which the Michigan Department of Natural Resources is enforcing a 2010 Invasive Species Order declaring a certain species of swine prohibited in Michigan.

In May of 2010, the Michigan legislature passed a law allowing swine running at large to be killed on public and private land. Hunters with a valid Michigan hunting license of any type or a concealed pistol permit are encouraged to shoot feral swine. This change provided much greater flexibility for the public to participate in the lethal control of feral swine. This legislation also declared that swine running at large are a public nuisance.

Michigan agencies have received numerous e-mails and phone calls from Michigan and non-Michigan hunters requesting reported locations of feral swine and requirements to pursue them.

In December of 2010, the DNR issued Invasive Species Order Amendment 1 of 2011 declaring feral swine (also known as wild boar/hog, feral pig/hog, razorback, Old World swine Eurasian wild boar, Russian wild boar) be an invasive species in an effort to eliminate source populations. The order took affect in October of 2011 and the deadline for dispossessing these invasive swine species is April 1, 2012. The DNR also issued a Declaratory Ruling (provided in the DNR Administrative Rule 299.3095) to clarify the “exact standards that MDNR will be utilizing to determine the hybrid, genetic variants, and offspring of prohibited swine.”

The DNR began tracking sightings and damage of wild swine in 2001 and developed and maintains a website that serves as a repository for information on wild swine (www.michigan.gov/feralswine). Additionally, posters advising the public to shoot swine running at large were distributed to all DNR license agents.

There have been no raids on properties. Since April 1, when active enforcement of the order began, the Michigan Department of Natural Resources has conducted inspections on game ranches and breeding facilities throughout Michigan. These facilities have in the past have been known to possess prohibited swine. The inspections are conducted by trained Wildlife personnel and conservation officers. The vast majority of these inspections have been conducted with the consent of property owners.

The DNR has not violated anyone’s constitutional rights. The DNR has followed the law, the Michigan Constitution and United States Constitution in all its enforcement actions. Every inspection starts with a request for voluntary access to inspect the facility. If access is CREEKSWARTZOFnot CITYvoluntarily granted, the DNR seeks a courtissued NO.a ORDINANCE 409inspection warrant or court order. The An ordinance to amend Sections 18-21 DNR has been denied access to property on two and 18-23 of Article II of Chapter 18 of occasions. In one case, the DNR sought and the Code of Ordinances to bring them received an administrative inspection warrant to into compliance with state law concerning certain related driving offenses Deer Tracks alcohol-legally search the Ranch in Fife Lake, and the penalties for violations thereof. Michigan. No prohibited swine were found at that property. In the other case, the DNR initiated a civil complaint against the Renegade Ranch THE CITY OF SWARTZ CREEK

ORDAINS:Hunting Preserve in Cheboygan County, Michigan. DNR obtained a temporary restraining Section 1. Amendment of Section 18- order from the court that provided access to the 21 of Article II of Chapter 18 of the property to conduct an inspection. That litigation Code of Ordinances of the City of is ongoing. Swartz Creek.

The DNR has killed no swine in enforcing Section 18-21 of Article II of Chapter the order. To date, the DNR has inspected only 18 of the Code of Ordinances of the City hunting ranches and breeding facilities that supply of Swartz Creek is hereby amended to ranches. These animals readtypically swine asto hunting follows:are possessed and raised to be hunted. Property Sec. 18-21. Adoption. owners have had 15 months since the Invasive Species Order was first put in place to plan for The Michigan Vehicle Code, 1949 PA

300, as amended fromcomplying with the order. timeThe DNR sought to time, is adopted by reference. throughout that period to work with property owners who had prohibited swine, and even found Section 2. Amendment of Section 18- out-of-state buyers for some prohibited swine. 23 of Article II of Chapter 18 of the Property owners who have Code of Ordinances of the City ofkilled prohibited swine Swartz Creek. did so by their own choice and as an alternative to selling their animals prior to the April 1 enforcement Section 18-23 of Article II of Chapter deadline. 18 of the Code of Ordinances of the City of SwartzInvasiveThe is CreekattackannotOrderSpecies is hereby amended to read as follows: on farms. In fact, the order is intended to protect Michigan farms. The animals at issue are not traditional Sec. 18-23. Penalties. farm pigs. The Invasive Species Order prohibits Sus Linnaeus, (species, a) Violationsa of section 625(1)(c) ofparticular scrofa the Michigan Vehicle Code are punishable commonly known as Russian boars, Eurasian wild by community service for not more boars, or razorbacks. This species is the terrestrial than 360 hours, imprisonment for not equivalent of Asian carp. The swine are incredibly more than 180 days, and/or a fine of

$700.00; and carry diseases that threaten domestic hogs, other livestock, wildlife and people. The owners (b) The penalties provided by the of heritage pigs are not affected unless they own a Michigan Vehicle Code are adopted by Russian Eurasian reference, provided, however,boar or thatboarwild or a hybrid of the city may not enforce any provision of the a Russian boar or Eurasian wild boar. Michigan Vehicle Code, except for violations The Michigan Court of Appeals upheld the of section (625(1)(c), for which the department’s issuance of the Invasive Species maximum period of imprisonment is

(began. greaterOrder one month before days.enforcement than ninety-three 93) Further, the Court of Appeals ruled that the Section 3. Effective Date. department was required to list this species as a prohibited species, pursuant to its statutory obligations This Ordinance shall take effect June 1,