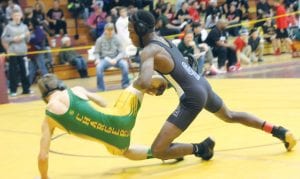 DAVISON – Elijah Brandon placed third at 103 pounds, and Carman- Ainsworth had six other wrestlers place in the top eight last Saturday at the Genesee County Tournament at Davison High.

The Cavaliers were missing key wrestlers Damion Wilkes at 119 and Coreyonte Thomas at 140 due to illness and finished 13th as a team with 51.5 points. Host Davison won with 295 and Lake Fenton was second with 203.

With only seven wrestlers entered in his weight class, Brandon drew byes into the quarterfinals, where he scored a 17-6 major decision over Midland Dow’s Jacob Sweet. Brandon then fell to eventual champion AJ Geyer of Lake Fenton and dropped into the consolation bracket, where he pinned Chesaning’s Dawson Giesken in 2:00 in the third-place final.

Nathan DeLong reached the semifinals at 135 before eventually finishing fourth. DeLong beat Dow’s Michael Moore 7-0 in the quarterfinals, then lost a 9-0 decision to Lake Fenton’s Devan Melick in the semis. DeLong lost the third-place final to Montrose’s Brad Payne 5-1. 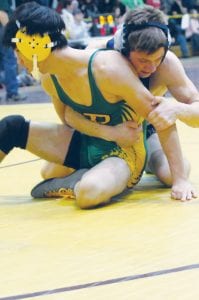 Ronald Roland had to work harder to earn fifth place at 215. Roland opened with a 19-second pin of Durand’s Denver Jewell but lost a 7-4 decision to Lapeer’s Sam Kinne to drop into the consolation bracket. Roland came back with a 6-4 win over Lake Fenton’s Ryan Franks and pinned Bentley’s Dominic Johnson in 3:00 in the fifth-place final.

Grayden “Cookie” Hamilton came back from a first-round loss to finish seventh at 285. Hamilton pinned his next opponent, Clio’s Ethan Rohl, in 42 seconds, then beat LakeVille’s Kane Pyonk 2-0. He pinned Davison’s Johnny Lindsey in 2:54 to win the seventh place final.

Clifford Boxley edged teammate Cheng Yang 4-3 in the seventh-place final to give Carman-Ainsworth seventh and eighth place at 130 pounds.

Dominique Horton placed eighth at 160. He lost his first-round match to fall into the consolation bracket, where he stayed alive with a 10-4 win over Dow’s Hunter Clipper. He then lost the seventh-place final to Lapeer’s Griffin Bousted.

Jacob Yost went 2-2 at 112. He pinned Fenton’s Mario Ramirez in 3:44 and beat LakeVille’s Doug Hennessy 17-2 in a technical fall. A loss to Millington’s Dakota Tatro dropped him into the consolation bracket, where he lost a fifth-place semifinal to LakeVille’s Zach Young 9-4.

Last Wednesday, Carman-Ainsworth routed Fenton 60-22 and edged Flushing 42-36 in a triangular at Flushing. Brandon, Yost, Roland and Hamilton all won both their matches.

Carman-Ainsworth will wrestle at Montrose on Saturday.