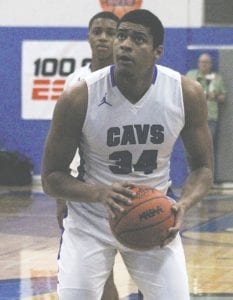 Most schools are already in compliance with a new rule that starts with the 2024-25 season that states that jersey numbers can no longer be the same color as the jersey with a contrasting color outlining the number. Officials need a more distinct visible difference in the colors for identifying players by number, such as this one of a Carman- Ainsworth player. File Photo

INDIANAPOLIS — Five of the seven rules changes in high school basketball concern player equipment, including new uniform provisions that will be required in the 2024-25 season.

All seven rules revisions recommended by the National Federation of State High School Associations (NFHS) Basketball Rules Committee at its April 23-25 meeting in Indianapolis were subsequently approved by the NFHS Board of Directors.

A five-year implementation date was approved to allow schools time to budget for purchasing new uniforms.

Four other changes were approved in Rule 3 – Players, Substitutes and Equipment. A new rule, 3-5-8, provides recommendations for use of a mouth guard. Though not required, the committee noted that state associations may deem a tooth and mouth protector required equipment.

A note was added to Rule 3-5-5 to permit folding or rolling the shorts at the natural waistband seam. The new language does state that the shorts have to be in compliance with Rule 3-4-5, which restricts uniform pants/ skirts to one visible manufacturer’s logo/trademark/reference.

Theresia Wynns, NFHS director of sports and officials and liaison to the Basketball Rules Committee, said this addition to Rule 3-5-5 modernizes the rule and allows players to adjust the shorts in a manner that serves no harm to the game or its integrity.

In another change, assistant coaches now will be able to go onto the court with the head coach in an effort to restore order when a fight breaks out among players.

“It can be difficult for officials to separate players involved in a fight on the court,” Wynns said. “This change will allow assistant coaches to enter the court with the head coach to assist officials in regaining control of the situation and restoring player safety.”

“This change should help to alleviate conflicting calls by officials when a held ball occurs,” Wynns said. “We currently raise one arm to stop the clock for everything except the jump/ held ball.”