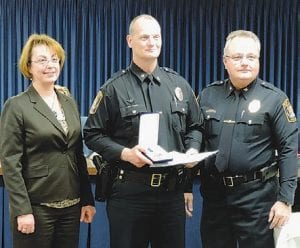 Township Supervisor Karyn Miller and Police Chief George Sippert present the Medal for Distinguished Service to Lt. Robert Batinkoff for his work in a carjacking murder at a Corunna Road gas station in March 2012.

The highest honor — the Medal for Distinguished Service — went to Lt. Robert Batinkoff for his work leading to the arrests of four people who were subsequently convicted in the shooting death of Leslie Mills, of Grand Blanc Township, during a carjacking at a gas station on Corunna Road in March 2012. The medal is given for actions exemplifying bravery and self-sacrifice involving significant risk to the life of the officer.

Also cited in the case were Detective Brett Cassidy and Officer Douglas Hart. Both were presented the Medal for Meritorious Service. The award recognized the officers for selfless conduct, profound compassion and exceptional professionalism while performing a difficult task under impossible circumstances beyond what is normally expected. 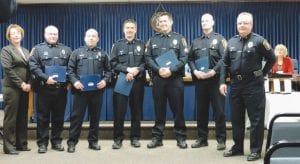 In presenting the citations, Police Chief George Sippert revealed graphic behind-the-scenes details about “ one of the most heinous crimes ever committed in Flint Township.”

Officer Hart was the first to arrive on the scene where he found Mills lying in a pool of blood with multiple gunshot wounds, Chief Sippert said. Hart tried to reduce the bleeding by applying pressure to her wounds and to comfort her until help arrived. Mills was gasping for breath but able to speak and provided vital information in identifying her assailants.

Detective Cassidy was the second officer on the scene who helped apply pressure to Mills’ wounds and also accompanied her to the hospital where she died shortly after arrival. At the hospital, Det. Cassidy spoke with Mills husband and obtained important information including that her stolen car was equipped with OnStar.

Police were able to track Mills car to the Economy Motel just down the street from the murder scene. The car was put under surveillance. Lt. Batinkoff was working alone, about 75 minutes into his watch from a hidden location, when a suspect approached the car and began wiping down the passenger door handle and dashboard, Chief Sippert said.

Batinkoff called for back up but before help could arrive, a mini van drove up to the suspect at the victim’s car. Fearing the man was about to flee, Lt. Batinkoff “single-handedly approached the van and its occupants, identified himself as a police officer and with gun drawn ordered the man to the ground.” He also ordered the three people in the van to leave the vehicle and lay on the ground.

Batinkoff held them at gunpoint until help arrived. The suspects led officers to crucial physical evidence including recovery of the weapon used and identification of an at-large fourth suspect involved in the shooting, who was arrested within 24 hours.

Chief Sippert also presented a Citation for Professional Excellence to Batinkoff, Hart, Cassidy and three other officers who assisted in the Mills case. They are Sgt. James Baldwin and detectives Frank Hartner and Alex Minto.

As a result of all officers involved in the response and investigation, “this dreadful crime was solved and four dangerous felons convicted,’’ Chief Sippert said.

He also presented a Unit Citation for Professional Excellence to six officers involved in bringing to justice “a criminal network of career bank robbers.”

The first in a string of robberies happened on Oct. 13, 2010 when two armed men robbed the Citizens Bank on Beecher Road, Chief Sippert said. During the next two years, evidence tied the first bank robbery to at least seven others – four in Flint and three in Flint Township – characterized by “brazen armed takeovers” usually with military-style weapons, Chief Sippert said.

Physical evidence from the scene of the first robbery eventually led to the arrest of a suspect who provided information that resulted in search warrants that “uncovered a criminal network of career bank robbers” whose primary source of income appeared to be robbing banks,

Two suspects were arrested and a third remains at large and is being sought by a fugitives team.

Efforts by the Flint township police detective team were “instrumental in identifying and bringing to justice these dangerous career felons, thereby safeguarding the community we serve,’ Chief Sippert said.

Officer VanLente was cited for his actions on Jan, 29 of this year, which led to arrests of serial strong-arm robbers. In two days, the suspects had stolen cartons of cigarettes from two local Speedways. Investigative work identified one of the thieves and his address at the Clover Tree Apartments off Court Street. Officer Van Lente maintained surveillance until he located the suspect who was stopped for running a stop sign near the apartment complex. Officers recovered evidence from the car and later learned that the two suspects were responsible for numerous cigarette thefts in Burton and surrounding communities.

Officer White was cited for his action on Jan. 29 when officers were dispatched to Clover Tree for reports of a man shooting a gun in the air. While on site, officers learned that a man at Clover Tree was being sought for questioning in a recent homicide in Flint. He was a parole absconder also wanted for assault to commit murder, armed robbery. While officers approached an apartment where they believed the suspect was hiding, Officer White, who remained outside, observed a man running from the building to another building. At that time, he did not know that it was the person being sought. Following up on White’s observation, officers approached the second building and followed snowy footprints to an apartment where the suspect was found hiding in a bedroom closet. The 18-year-old parolee was turned over to the Michigan State Police.

Schuyler was cited for his actions on Feb. 2 of this year when a routine traffic stop brought attention to a “nervous” passenger who gave the wrong name. Using his car computer, Officer Schuyler pulled up the driver’s license photo of the person the passenger claimed to be and found they did not match. The man was arrested for giving false information to a police officer. It was learned that he was a parole absconder wanted on four-count felony warrant charges of assault with intent to commit murder, armed robbery, felony possession of a firearm and felony firearm.

“Officer Schuyler’s persistence to fully investigate resulted in a dangerous felon being removed from the streets,” Sippert said.

Detective Cassidy also received a Citation for Professional Excellence for his investigative work that helped identify suspects responsible for the theft of a taser and three sets of body armor from an unmarked police car at a Miller Road restaurant on March 6. Police recovered the stolen equipment in addition to items and weapons stolen in other car larcenies in the past six months.