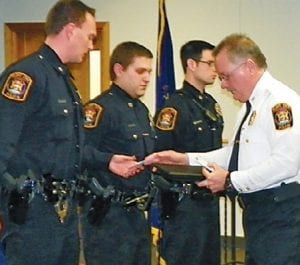 FLINT TWP. — Police officers who rescued a frantic mother from a burning home and pulled a man from a burning auto wreck were awarded the Medal of Distinguished Service at the township board meeting Monday night.

VanLente, Grzanka and Hart were cited for their efforts early on fire on Steeple Chase Court believed to have two children trapped inside.

The “hysterical” mother of the children had made several attempts to enter the burning building and could not tell officers precisely where to find the children inside the smoke-filled interior, Sippert recounted.

Both officers entered the home, crawling beneath the smoke, found the woman not far from the door near the flames and pulled her back out of the building.They then reentered the home and attempted to climb the stairs to the second floor.

Officer Grzanka and an officer from another jurisdiction arrived and joined the effort to locate the children.

The fire department arrived on scene, got the fire under control and made it possible to search the upstairs of the home. It was learned that the children ages 6 and 13 were not in the home after all and had been taken to the home of a family member earlier. The mother was treated at the scene but refused further medical treatment.

Sippert cited the officers for actions involving significant risk to their own lives.

Officers Nemecheck and Cassidy were cited for their work at the scene of a car accident in the morning hours of Feb. 1.

Responding to a call of an accident on northbound I-75 near Corunna Road, they arrived to find the vehicle had rolled over trapping the driver inside. The vehicle had sustained major damage to the engine compartment which was on fire.

A nearby resident who heard the crash was attempting to douse the flame with a garden hose. Both officers and a state trooper on the scene, used portable fire extinguishers from their patrol vehicles to subdue the flames.

That allowed Officer Nemecheck to approach the vehicle and release the driver’s seatbelt. Then all three officers pulled the driver, a 39-year-old Flint man, through the window of the vehicle He was transported to Hurley Medical Center for treatment.

Sippert said that Fire Chief John Ringwelski had concurred in a recent conversation that loss of life would have resulted if the officers had not acted as they did.

After the awards presentation, Ringwelski said that police officers provide valuable assistance at many fire scenes and added his praise to the officers being cited.

Sippert said the officers would receive a medal and a service bar to wear on their uniforms.

Nominations for the awards are initiated by command officers and reviewed by a committee which decides if the honor is merited, he said.