‘Shakespeare in the Park’ comes to For-Mar 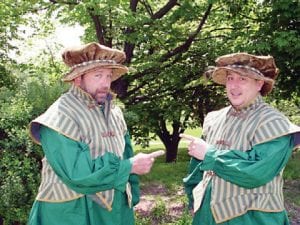 Brian Haggard and Jason Garza are featured in “Comedy of Errors,” noted as Shakespeare’s funniest and shortest play.

BURTON — For seven years, Flint’s “Shakespeare in the Park” in Kearsley Park has drawn rave reviews and enthusiastic crowds. Now for the third year the production is going beyond Kearsley Park to parks across the city and county, including For-Mar Nature Preserve.

Admission to all performances (except the opening night gala at Kearsley Park) is free. Please bring your own lawn chairs everywhere except Kearsley Park, where seats will be provided.

This year’s production — “The Comedy of Errors” — is described as Shakespeare’s shortest and funniest play. It comes to For-Mar Nature Preserve with a performance June 16, at 7 p.m..

When the Syracusans encounter the friends and families of their twins, a series of wild mishaps based on mistaken identities lead to wrongful beatings, a near-seduction, the arrest of Antipholus of Ephesus, and hilarious accusations of infidelity, theft, madness and demonic possession. The play is directed by Kay Kelly.