‘Shakespeare in the Park’

Free performances open to the public 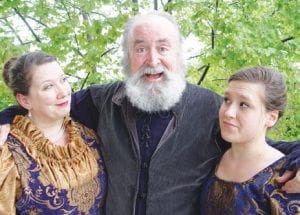 GENESEE COUNTY — For 10 years, Flint’s “Shakespeare in the Park” in Kearsley Park has drawn rave reviews and enthusiastic crowds for productions of classic Shakespeare plays in the heart of Flint. Again this year, the production is going beyond Kearsley Park to parks across the city and county.

This year’s production — Merry Wives of Windsor — features key human themes including love and marriage, jealousy and revenge, social class and wealth. Explored with irony, sexual innuendo, sarcasm and stereotypical views of classes and nationalities, these themes help to give the play something closer to a modern day view than is often found in Shakespeare’s plays.

It opens at Kearsley Park with performances on Friday, June 13, and Saturday, June 14 at 8 p.m., with the only afternoon matinee on Sunday, June 15 at 2 p.m.

Admission to all performances (except the opening night fund raising gala at Kearsley Park) is FREE. Please bring your own lawn chairs everywhere except Kearsley Park. The Opening Gala at Kearsley Park features strawberries and cream before the show and champagne by candlelight afterwards with the actors, all compliments of Fandangles’. Gala tickets are $25 and up.

Join your friends and neighbors all over Genesee County as we celebrate summer in our parks. More information at kearsleyparkplayers.com.