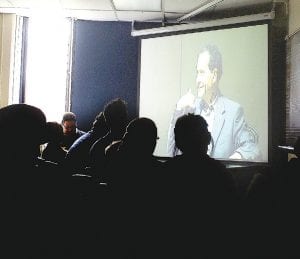 An audience at Mott Community College listens to Tony Shalhoub in an overflow room.

FLINT — Tony Shalhoub of TV’s Monk fame said he never set out to be on television.

“I always felt that I had this mechanism inside me — maybe it was the product of being the second youngest of 10 children — of being on the bottom,” said Shaloub on April 8. “I always liked that feeling of being third class citizen.”

Shalhoub delivered a lecture at Mott Community College to a packed house. A classroom-turned-overflow room using a screen to broadcast his lecture exceeded capacity and would-be audience members were turned away.

The actor remarked Flint was about the same size as his childhood town of Green Bay and both faced transitional stages. Shalhoub recently joined protesters in the ongoing Wisconsin union struggles.

The son of Lebanese parents, Shalhoub finished a master’s program at the Yale School of Drama and honed his acting at the American Repertory Theater after graduation.

“I realized it was about taking whatever modicum of talent you had and getting it into training,” he said.

Shalhoub said that life in Cambridge and Boston was “idyllic” and he moved to New York because he felt too complacent.

“I think it’s true in all fields — academia, creative fields and medicine — that the real nature is never to feel too secure,” he said.

Shalhoub said commercial theater was frowned upon after his tutelage in the American Repertory.

“Neil Simon was like going over to the enemy camp.”

Nevertheless Shaloub earned a romantic part opposite Meryl Streep in a movie.

“I put the call sheet on my refrigerator,” he remembered.

However, Shalhoub’s scene was ultimately cut from the film. Only a brief shot of the top of his head during an airplane scene remained.

Shaloub said that he “stupidly” went to go see the movie when it came out.

“My brother, always a big supporter, said ‘Hey I saw you in that movie. I really believed you were a passenger on that airplane.’ It was one of many many humiliations in my life.”

Shalhoub said his earliest embarrassment on the stage came when he was 6 years old. Starring in a musical rendition of The King and I in Green Bay, he found himself on the wrong side of the stage when the curtains closed.

“It was one of these incredibly awkward moments where I was on the outside and the audience was laughing at me. The more I cried, the more the audience laughed at me,” he said. “From then, I became dedicated to the reenactment — getting the biggest laugh.”

After 125 episodes of Monk in which he served as lead actor and show producer, Shalhoub said he came out of the experience with a brand new respect for people in the small screen industry.

“[Each episode] was like giving birth. It was an enormous undertaking,” he said of the 16 per-year episodes.

Since the end of the series in 2009, Shalhoub has divided his time between Broadway productions and his two daughters with wife Brooke Adams.