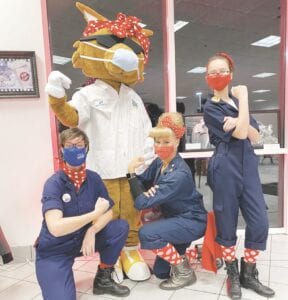 Shea Automotive Group partnered with 103.9 The Fox and the Flint Women’s Forum for a Rosie the Riveter radiothon on Dec. 4. Photo provided

FLINT TWP. — Organizers with the Rosie the Riveter statue project made one final fundraising push to bring a World War II women’s icon to Genesee County.

Last Friday, Shea Automotive Group teamed up with 103.9 The Fox, the Flint Women’s Forum and Back to the Bricks to host a Rosie the Riveter Radiothon at its Flint Township dealership. Listeners could donate to the project by calling in between 7 a.m. to 7 p.m., while also having the chance to win gift baskets and other exclusive prizes.

Thanks to contributions made during the radiothon, Shea reached its $40,000 goal to aid in the creation of a life- sized bronze statue of Rosie the Riveter.

In addition to fielding donations, Shea and 103.9 The Fox welcomed special guests for interviews, including several real-life “Rosies” who worked in local auto plants during WWII. Back to the Bricks Executive Director Amber Taylor, who is serving as the model for the Rosie statue, was also on hand to volunteer at the radiothon.

Shea employees, along with volunteers from the Flint Women’s Forum, HAP, Dort Financial Credit Union and McLaren Healthcare, answered phone calls and helped to collect donations through the day.

McKenzie Miller, Director of Corporate Partnership & Marketing for Shea, said that the dealership was honored to work alongside the Flint Women’s Forum to help give Rosie the Riveter her rightful place in Flint’s automotive history.

“When the men were off fighting in WWII, the women were back home building the planes and tanks,” Miller said. “Rosie is such an inspiration and example for women today. With Rosie being such an icon for women worldwide, and us being a woman-owned dealership, we knew this would be a great organization to partner with.”

During WWII, Rosie the Riveter was the star of a campaign aimed at recruiting women into the defense industries. Rosie served not only as a recruitment tool but also as a symbol for working women and female empowerment.

Upon completion, the Rosie statue will be displayed at Flint Bishop Airport alongside statues of auto industry pioneers Walter P. Chrysler and Charles Nash. She will be the first female statue in the Automobile Heritage Collection.