Sheriff Swanson recognized as Officer of the Month by national organization 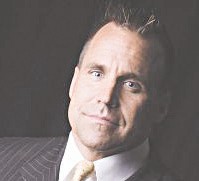 GENESEE COUNTY — Interim Genesee County Sheriff Chris Swanson has been honored as the National Law Enforcement Memorial and Museum’s Officer of the Month for June.

Swanson, the interim sheriff since January, received the award following his acts of leadership at a Black Lives Matter protest in Flint Township.

On May 30, several hundred people marched down Miller Road in Flint Township to protest the death of George Floyd, a Black man who died in police custody in Minneapolis on May 25. As protestors marched to the Flint Township Police Department, Swanson and his deputies monitored the scene alongside township police.

When the situation grew tense, Swanson decided to remove his riot gear and talk with protestors. He then embraced several people in the crowd and joined the march—as did several of his deputies and local police.

“In that one moment, Sheriff Swanson showed the kind of leadership, courage and integrity that makes exemplary law enforcement leaders,” said Mario Ferranto, CEO of the National Law Enforcement Memorial and Museum. “While the world is watching how law enforcement behaves, the statements, actions and commitment to community that he demonstrated makes us proud to honor Sheriff Swanson as Officer of the Month.”

For his part, Swanson said that his award recognition would not have been made possible without the actions of protestors to welcome him into the march.

“It was that night when hostility reached a tipping point, and this community was within seconds of becoming another national statistic,” he said upon receiving the recognition. “I would ask that in your consideration, you add to that list those that protested with me, which allowed my voice to be heard, as much as they wanted to be heard.”

The National Law Enforcement Officers Memorial Fund is a nonprofit organization dedicated to honoring the service and sacrifice of America’s law enforcement officers. The Memorial Fund’s Officer of the Month Award Program began in 1996 and recognizes federal, state and local officers who have distinguished themselves through exemplary law enforcement service and devotion to duty.

Law enforcement personnel who are selected for Officer of the Month are those have gone above and beyond the call of duty. Service for which an officer can be nominated for includes but is not limited to: extreme actions of valor on or off duty; exemplary law enforcement service; community service; and distinguished service throughout a career.

Officer of the Month Award recipients are honored at a special awards reception each May in Washington, D.C., during National Police Week, and are featured in the Memorial Fund’s annual calendar.

To nominate an officer for the National Law Enforcement Officers Memorial and Museum’s Office of the Month award, visit nleomf.org/officer-of-the-month-award.