Sheriff talks health at the jail, domestic violence in the community 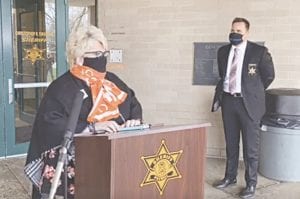 GENESEE COUNTY — Interim Genesee County Sheriff Chris Swanson said in his April 29 weekly briefing the jail is reporting no new cases of COVID-19 amongst its staff and zero cases among the inmate population.

Swanson, who is also the county’s Emergency Management Director, said he is pleased to report no further infections among his staff since three employees at the jail came down with COVID-19 in April.

“It’s been two weeks since we had an employee test positive here at the jail for COVID-19, and we are still zero cases in our jail for inmates infected with COVID-19,” said Swanson. “Which is a huge benchmark, not because of one person, or one protocol, but because it’s a team effort.”

Considering that Genesee County is the fourth highest county in the state in terms of cases and deaths from COVID- 19, Swanson said the jail’s status is a testament to everybody in the sheriff’s office.

Swanson praised the jail’s move to a single point of entry, sanitization effort and the jail’s cleaning crews – both the sheriff department’s and inmates.

“It’s because we all take it serious,” said Swanson. “My job as sheriff is to take care of the men and women in the jail, and I’m still thankful that its zero cases. Currently our jail count is 398 people, and of those 398 people, 388 are felons.”

Swanson also said he held a townhall meeting in the jail to inform inmates of what the changes in the courts and the legal system are, during the coronavirus outbreak, and how they will be affected going forward.

“That way they don’t have a concern, the tension,” he said. “They don’t have the unclear out there, because as we say on our staff, sometimes to be unclear is unkind.”

Swanson also spoke about the sheriff’s and prosecutor’s offices working closely with the YWCA of Greater Flint to protect victims of domestic violence and sexual abuse during this time.

Michelle Rosynsky, CEO of the YWCA of Greater Flint, said her office is working with the sheriff and prosecutor through the STOP grant they recently received.

She said the YWCA will work with those two departments to provide wraparound services domestic violence and sexual assault. Money from the grant allowed the Prosecutor’s Office to hire two new assistant prosecutors.

It also allowed for the YWCA will bring on two new victim advocates and the sheriff’s office to create two new positions assigned to work for them.

Rosynsky said the YWCA remains open during the pandemic to provide counseling, advocacy, personal protection orders and safe housing to victims of domestic violence and sexual assault. They are also available to administer rape kit examinations.

“We thank you for your partnership,” she said at Swanson’s press briefing. “We remain open, our services available 24/7.”

Rosynsky said the YWCA’s safe house also remains open and those in need of help to get away from a difficult, violent situation should call their crisis line at 810-238- SAFE. Swanson added victims can also call 911 for assistance anytime.