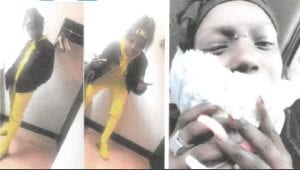 Photos of Tanadia Younger of Flint who is charged with nine felony counts in connection with the alleged human trafficking of three teenage girls. Photo provided

GENESEE COUNTY — The Genesee County Sheriff’s Department GHOST team arrested a woman who is charged nine counts in connection with the alleged human trafficking of three teenagers in Ohio and Michigan.

Tanadia Younger, a Flint woman, was arrested Feb. 20 after police rescued three young girls, ages 16, 15 and 14, from a local motel where they were allegedly being forced to act as prostitutes.

Swanson said Younger allegedly set up more than 100 dates for each girl over a period of 90 days, moving them between Toledo, Kalamazoo, Lansing and Flint.

“Based on training and experience, our officers knew something was up,” said Interim Genesee County Sheriff Chris Swanson. “The next day we called up these three individuals and did an investigation at a local hotel. There, we took three individuals into custody for their own protection – they were 16, 15 and 14 years old.”

“The prosecutor, who we partnered with on this, is not going to go lightly on these cases,” said Swanson. “(Younger is) in custody upstairs (in the jail) on a bond she’ll never make.”

Further details were not available.