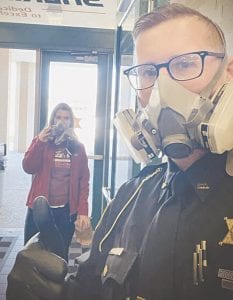 GENESEE COUNTY — Genesee County Sheriff’s Department deputies and personnel are being urged to find time to have a little fun on the job during these stressful times.

Interim Sheriff Chris Swanson announced last week at his press briefing his department’s Community Policing contest which encourages Sheriff’s Department employees to have a little fun on the job and post their activities on the department’s Facebook page.

“It’s called community policing and it’s something departments all across the county do,” said Swanson. “Obviously, we see the ugly side of life, but we’d also like to encourage the good side of life. That’s why you see us in parades, why you see us at events, this time of year and this time in our lives is no different.”

He said community policing is basically carving a few minutes a week out of a deputy’s day to do something fun, like driving by a child’s home for their birthday with sirens and flashers going, or standing near the checkouts at a local supermarket with a sign thanking the employees for what they’re doing during the COVID-19 crisis.

“That’s why police departments are trying to do something to encourage people. To show that we’re still here,” said Swanson. “There’s still a lot to do, but we want to reach out and show you, the community, that we’re partnering with you.”

The contest ends May 1 and deputies are encouraged to use their time to be creative while on duty, when they have a short window of opportunity to do something fun with the community. Then they can upload their pictures and their video stories to the Genesee County Sheriff’s Department Facebook page.

At the end of the month, Swanson said whoever has the most likes, views and shares gets a $100 gift card that he’s personally paying for.

Swanson said he hears the paramedics on the radio all the time reporting patients who might be suffering from COVID-19, and with all the negativity he wants his personnel to know they can’t let themselves be subjected to so much pressure they forget about the human side of life.

“They too need to be taken care of,” he said. “So that’s what the community policing thing is. It helps us just as much as it does you.”