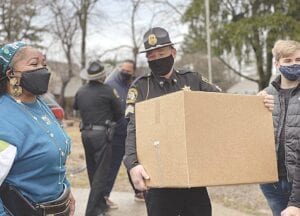 FLINT — Christmas came early for 200 Flint area families when they received a knock on the door from Genesee County Sheriff’s deputies on Dec. 12.

The Genesee County Sheriff’s Office, in tandem with the Salvation Army and many other local partners, delivered hundreds of Christmas boxes to special citizens in need across Flint and Genesee County. Each Christmas box was filled with toys, clothes, candy, masks, pet food and blankets, with most boxes containing between $200 and $300 worth of goods. The boxes also included tote bags donated by local bag company Oliver Thomas.

The donation drive was all part of the first-ever “Walk With Us Christmas Spectacular,” an event started by the Genesee County Sheriff’s Office to give back to residents in Flint who have been struggling through the COVID- 19 pandemic and lingering effects of the Flint Water Crisis, as well as other county residents who needed a helping hand this holiday season. 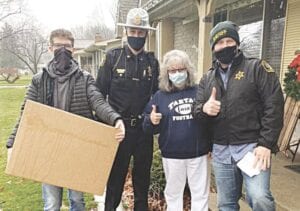 Many local businesses got involved with the drive by dropping off donations and supplies outside the Genesee County Jail on Dec. 9. Genesee County Sheriff Chris Swanson and his deputies loaded each donation into a huge U-Haul truck and packed the boxes last Friday in preparation for Saturday’s deliveries.

A caravan of eight U-Hauls then hit the streets early Saturday morning, traveling through Flint and Genesee County to deliver the Christmas boxes.

The Genesee County Sheriff’s Office also partnered with the United Way of Genesee County to tally a list of Christmas box recipients and received special donations from Autozone Detroit, Northgate, the NFL Alumni Detroit Chapter, PetSmart, local churches and many other businesses across the state.

Swanson said that the idea behind “Walk With Us” developed from the May 30 Black Lives Matter march in Flint Township—in which Swanson, his deputies and officers from other departments marched with demonstrators to protest racial injustice.

“From the start of this whole movement, people continued to ask ‘what’s next?’ and how do we (local law enforcement) keep it going,” Swanson said. “What we came up with…was an idea to pack big boxes filled with things of value and give them to people who need them.”

Swanson said that his department is hoping to make the “Walk With Us Christmas Spectacular” an annual holiday giving event on the second Saturday of December for residents in Flint and Genesee County.

“We’re sending a message to the community that have suffered even beyond COVID through the Water Crisis, to let them know that (they’re) not forgotten,” he said..