Sherwood set to bring interactive, unique brand of improv to The Whiting 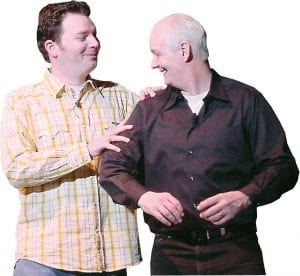 Brad Sherwood and Colin Mochrie will take the audience on a wild, comedic ride with their Jan. 22 performance.

FLINT — When it comes to his upcoming stop in Flint, comedian/ actor Brad Sherwood has a lot to say. Sherwood and fellow comedian/actor Colin Mochrie, stars of Whose Line Is It Anyway?, will delight audiences with their unique breed of comedy with a performance at The Whiting, 1241 E. Kearsley St., 8 p.m. Jan. 22.

The upcoming performance will be the first time the duo have been to Flint, but they are familiar with Michigan.

“We’ve been to a lot of places in Michigan — Detroit, Saginaw,

After the enormous success of Whose Line Is It Anyway?, Mochrie and Sherwood, two stars of the Emmy-nominated series, have teamed up to present an evening of extraordinary improvisational comedy. The show continues to remain among the most popular live comedy shows touring the country. Using their quick wit,

But is anything ever off limits?

“We never take the show in a political direction,” Sherwood said. “Stand up comedians, news shows are doing that already. Ours is an apolitical show that stays away from that. We do silly comedy.”

Along with “silly comedy,” Sherwood and Mochrie count on the audience’s participation to make the show truly unique and fun.

“The audience controls the show. We have members of the audience up on stage for every game,” he said. “Our shows typically last two hours, and it’s an all ages show. Anything that is risqué is innuendo. We’re not up there swearing.”

Since embarking on their tour, which has been going for six-anda half years, Sherwood said there have been some bright spots and, unfortunately, unforgettable places.

“We like it when we get paid to go to Hawaii for a corporate event,” he said. “The worst place has been Houghton, Mich. We did two shows, then there was a blizzard. We went and got a car and drove about five-and-a-half hours to Green Bay for our next show.”

Mochrie has spent time touring with the Improv All Stars, and he continues to travel with An Evening with Colin Mochrie and Brad Sherwood regularly. He’s been heavily involved in independent and small movie projects and is even involved in ‘The Movie Co-op’, which is a Canadian venture to help produce great Canadian movies funded by and run by the artists themselves.

Sherwood is a regular cast member on ABC’s Whose Line Is It Anyway? and was a regular on the British version on Comedy Central as well. His credits include The Drew Carey Show, The Green Screen Show, The Smartest Guy In Town, Jury Duty, VH-1’s I Love The 70s, 80s, & 90s and more than 100 sketch appearances on The Tonight Show with Jay Leno. Brad’s other past credits include a season on LA Law, To Tell The Truth, The Newz, guest hosting Talk Soup and hosting The New Dating Game.

Ticket prices for the show range from $25 – $50 and are available online at TheWhiting.com, by phoning 810-237-7333 and by walk up at The Ticket Center located within The Whiting. Their performance is generously supported by Health Alliance Plan, McLaren Regional Medical Center, US 103.1, Joe FM, ABC 12, WFNT, Michigan Public Radio and the Charles Stewart Mott Foundation.