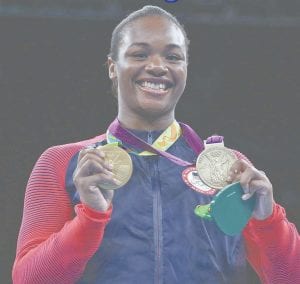 FLINT – Claressa Shields came from humble beginnings but is now on top of the world, winning her second consecutive Olympic gold medal on Sunday, the only US boxer to ever do so, male or female. Tuesday evening, she returned home to Flint to celebrate with her friends and family and spoke to the media during a press conference at Bishop International Airport.

“My journey to the 2016 games was way different than 2012,” said Shields. “Was it hard? No, the fights weren’t. But just the journey of doing it. Some of it by myself in the dark, in the gym. Some of it was where I was being pushed. Some was where I was pushing myself. There were a lot of times where I had to talk to God about everything that I had going on and just the fact that I did it, that’s what really moves me.”

Claressa began boxing at the age of 11 with inspiration from her father, Clarence, and trained at Flint’s legendary Berston Fieldhouse under trainer Jason Crutchfield. Before you knew it, she was an amateur phenom – and she was still a teenager. She qualified for the 2012 Olympic Games in London and won the gold medal at age 17.

She then returned home for her senior year at Flint Northwestern High School before boxing became her sole focus. Prior to the games, Shields was living in the US Olympic training facility in Colorado in preparation of this year’s games in Rio de Janeiro. She had high expectations heading into the Olympics, and she certainly didn’t disappoint, claiming her second straight gold.

“I’m just thankful. It was so hard to get there. I moved out of Flint last year to Colorado Springs and I haven’t seen my mom in three months and I just saw her today. I knew I could do it, like I said, it was just actually doing it. I carried all of you in my spirit. Thanks for all the Facebook messages, the Instagram messages, the Snap Chats.”

Shields began the Olympic tournament with a quarterfinal win over Russia’s Yaroslava Yakushina before taking down Dariga Shakimova in the semifinal. On Sunday, she clinched the gold medal with a pretty dominant effort to top Nouchka Fontjin of the Netherlands.

Shields will have another celebratory event on Thursday at the Dort Federal Credit Union Event Center in Flint. The doors will open at 6 p.m. with the event beginning at 7 p.m. It appears that Shields will now go pro and move herself and her family to Florida. Her amateur record is an eye-popping 77-1.