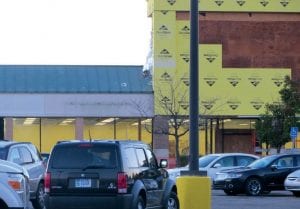 Shoe Carnival is getting ready to open a store next month at Oak Brook Square on Linden Road.

FLINT TWP. —In just over a month, Shoe Carnival, a leading retailer of valuepriced footwear and accessories, will become the latest national chain to open a new store in the township commercial district.

A ribbon-cutting for the shoe store is set for Nov. 7, according to Heather Kale, director of member services for the Flint & Genesee Chamber of Commerce.

Construction crews are hard at work combining three spaces into one.

No sign is up yet but a sign variance was approved last month by the township’s Zoning Board of Appeals, according to Trustee Frank Kasle, in a report to the township board on Sept. 16.

Kasle said that Shoe Carnival was granted a variance to erect a 169-squarefoot sign which is larger than the 50- square-feet usually allowed per store but actually not much out of compliance when multiplied by the three suites the store will occupy.

Shoe Carnival management did not respond to a request for details about the new store such as number of jobs or grand-opening plans. But its web site describes it as one of the fastest growing family footwear retailers in the country.

“Our continued expansion creates an ongoing need for diverse, highly talented people to join our team,” according to the web site information about job openings.

Shoe Carnival offers an assortment of value-priced dress, casual and athletic footwear for men, women and children with an emphasis on national and regional name brands.

As of June 5, 2013, the company, which is based in Evansville, IN,, operated 363 stores in 32 states and Puerto Rico, and also offers online shopping at www.shoecarnival.com.