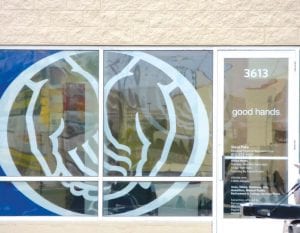 An Allstate Insurance agency is a new tenant at Genesee Crossing shopping plaza on Miller Road.

Agency owner Steve Pake said he chose the location because of the high visibility and amount of people using Miller Road daily. Traffic counts are as high as 27,479 a day, according to Ohio-based Chase Properties, which owns the plaza.

Pake’s office occupies 2,000- squarefeet of a narrow 6,000 square-foot sliver of space nestled between the Bed, Bath & Beyond and Old Navy stores. It has sat vacant for several years but was previously occupied by a Bargain Books store.

It’s a small space but easy to spot because of the huge Allstate “good hands” logo on the front window facing the parking lot.

Pake is not a newcomer to the insurance business. He also operates a primary agency in Lapeer which he opened in 2010.

“I wanted to open an office in Flint because I grew up here and I am very familiar with the area,” “Pake said in a written statement.

He has seven employees in the Flint Township office.

All sales are handled locally, he said, adding that face-to-face appointments is a unique aspect of the business. He and his sales managers schedule appointments in the office or at a customer’s home, he said.

Besides car and home insurance, other financial services offered include life insurance and mutual funds.

“I offer free financial advice for anyone looking for answers to questions regarding existing accounts or retirement,” Pake said.