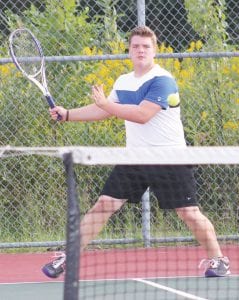 No. 1 Singles player Ethan Moore is one of six Cavaliers winding down their high school careers.

MIDLAND – Bob Chunn always takes the right approach to this time of the tennis season.

The Carman-Ainsworth coach is bringing another small squad of inexperienced players to a regional tournament loaded with talented, well-seasoned players from tennis powerhouses. The Cavaliers will play today in the Div. 1 regional at the Midland Community Tennis Center against the likes of Midland, Grand Blanc and Traverse City Central.

Only the top two teams and any other team scoring 18 points, along with the champion and runner-up at No. 1 Singles, will move on to the state finals Oct. 17-18 at the same site. None are likely to be Cavaliers.

But Chunn has the right attitude going in and passes that on to his players.

“My hope is the players go out and do the best they can with the skill level they have and have some fun with it,” he said. “For some kids, this will be their last day of competition in their high school career. I tell them to do their best and have fun.”

The Cavs haven’t put a full lineup on the court all season and usually have forfeited at Nos. 3 and 4 Doubles. But they do have four seniors in the singles ranks and two more at No. 1 Doubles.

The singles lineup has Ethan Moore at No. 1, Vlad Li at No. 2, Evan Walker at No. 3, and Luke Moore at No. 4. Christian Jones and Terrail Jones man the No. 1 Doubles flight, while sophomores Daniel Reese and Christian Williams play at No. 2 Doubles.

“All my doubles teams are relatively new players, and we’re giving up two points at Nos. 3 and 4 Doubles right from the get-go,” Chunn said. “So we’re at somewhat of a disadvantage going into this real strong regional.

“One of the things about these guys is they have a great attitude. They get out on the court and do the best they can and always demonstrate great sportsmanship. They never give up, even though the score may be against them. That’s all a coach can ask.”

The other schools in the nine-team field are Grand Ledge, Holt, Lapeer, host Saginaw Heritage and Traverse City West.