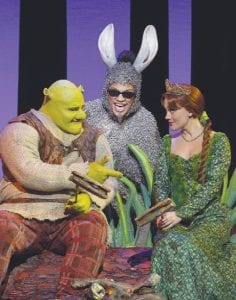 FLINT — DreamWorks Theatricals and NETworks Presentations, LLC. announce “Shrek the Musical” with book and lyrics by David Lindsay- Abaire and music by Jeanine Tesori, will play The Whiting, for three spectacular performances, February 1-2.

Tickets are on sale now and are available at TheWhiting.com, by phone at 810-237-7333 or 888-8-CENTER or by walk-up at The Whiting Ticket Center. The Whiting is located at 1241 E. Kearsley St. in Flint, just off I-475 between the University of Michigan Flint and Mott Community College on the Flint Cultural Center campus.

An entirely new musical which opened on Broadway December, 2009, “Shrek the Musical” is based on the story and characters from William Steig’s book Shrek!, as well as the DreamWorks Animation film Shrek, the first chapter of the Shrek movie series.

“Shrek the Musical” tells the story of a swamp-dwelling ogre who goes on a life-changing adventure to reclaim the deed to his land. Joined by a wise-cracking donkey, this unlikely hero fights a fearsome dragon, rescues a feisty princess and learns that real friendship and true love aren’t only found in fairy tales.