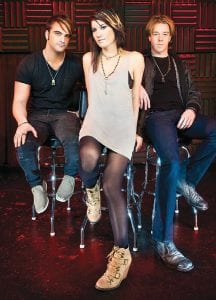 Sick Puppies are returning to the Machine Shop May 17. The trio (left to right) drummer Mark Goodwin, bassist Emma Anzai and vocalist/guitarist/ songwriter Shimon Moore will release their new single “There’s No Going Back” May 20 and will perform it along with some of their older material.

BURTON — The Australian-based band Sick Puppies will make a pit stop at the Machine Shop of Flint, May 17.

The stop is one of four mid-Western dates scheduled for the spring/summer tour.

The trio, which is made up of vocalist/ guitarist/songwriter Shimon Moore, bassist Emma Anzai and drummer Mark Goodwin, are set to unleash their new single “There’s No Going Back” May 20.

Moore said the new single is an “anthem-type of song.

“It’s about taking control of your life and trying to be the person you were born to be,” he said.

The band has been tight-lipped in regard to the new album. The official name has not been officially released yet, but there has been talk online it will be caleld “Under the Black Sky.”

Musically, the tour is a conglomeration of old songs and new songs.

“We are trying to get to the next level musically and it’s (the tour) is going to be the best of both world’s from the first record and second record,” said Moore.

Sick Puppies released their first US album ‘Dressed Up As Life’ in 2007 and their second album, ‘Tri-Polar’ in 2009.

The lead song off their third album — “You’re Going Down”— is used as the theme song for the WWE’s Extreme Rules pay-per-view broadcast, and “War,” in which the band entered a competition to win a place for a national marketing campaign for the video game Street Fighter IV is going to be part of the May 17’s explosive set list.

Moore said “Odd One” their second single off ‘Tri-Polar’ is another single the band will jam out to.

“I like the ‘Odd One’ because the crowd sings along to it,” said Moore. “When they sing the chorus it is always amazing.”

The Sick Puppies are returning to the Machine Shop after two years.

“We are excited to get out their and see everyone. We can’t wait to get playing these songs to see what everyone thinks,” said Moore. “If you have ever seen a Sick Puppies show it is going to better than the last and if they haven’t seen Sick Puppies show it’s a chance of a lifetime.”

For more about the band, visit their website at www.sickpuppies.com.

Tickets for their Machine Shop stop can be purchased in advanced for $22 at www.etix.com.