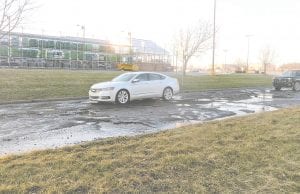 Today’s forecast called for mostly cloudy skies, which means there is a good chance that, according to folklore, the groundhog will not see its shadow and spring will come early. But whether or not the rodent meteorologist sees his shadow today, the recent January thaw brought a sign of early spring in the form of potholes. Since this photo was taken, a partial barricade has been erected on T.A. Mansour Boulevard between the Lowe’s and Sam’s Club stores to warn motorists that this stretch of road is indeed the pits.