Sign up now for the ‘Out Pick the Fat Guy’ contest 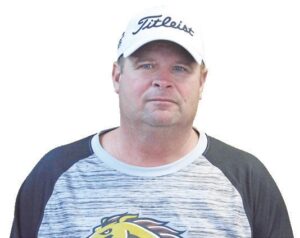 Yes, the crystal-clear pepper jack cheeseball is all plugged in for the NFL selections this week. I know you all want to see who the Fat Guy likes this week.

I see we only have 19 entries in the “Out Pick the Fat Guy.” What the heck are you waiting for to sign up? The winner gets a nice prize and anyone who finishes ahead of me goes into a drawing for a nice prize. It’s so simple football fans! Click on ESPN and Fantasy then hit Pig Skin Pick ‘em and group name is viewnewspapers. Yes, that is how simple it is and let the predictions fly like a Jared Goff interception! One more thing, if you miss the Thursday night game it’s no big deal it’s only one loss in a long season, so sign up before the Sunday games. Let’s get some players and see who the best handicapper really is!

The Michigan State Spartans opened up a can of whoop whoop on the Northwestern Wildcats last Friday night. Who saw a Sparty 38-21 smashing of Northwestern on the road? I sure didn’t to be honest. The running back Kenneth Walker III hit pay dirt four times and rushed for 264 yards on 23 carries! Wow, what an evening toting the rock for Walker. The quarterback play of Payton Thorne for Michigan State I thought was pretty decent overall for a Big Ten road game. I can tell you, the Northwestern defense was suspect at best for a team that is normally strong defensively. The next opponent for Sparty will be a home game at noon against Youngstown State. I believe the Spartans will have no trouble disposing the Youngstown State football team. 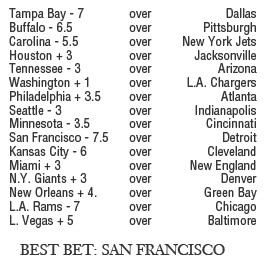 The Michigan Wolverines routed the Western Michigan Broncos 47-14 at the Big House. The win comes at a cost as wide receiver Ronnie Bell was injured in the second quarter. I believe Bell is a huge part of the Michigan offense this season and he would be a tremendous loss if the injury is season-ending. How about Cade McNamara only threw 11 passes in the game? He did complete nine of them and two of them resulted in touchdowns. The running back Blake Corum rushed for 111 yards. The Wolverines now welcome the Washington Huskies for a night game at the Big House. The Washington Huskies might be a tad bit ornery after losing to Montana 13-7. I say “ouchie” to that ugly loss! The boys in Vegas have installed Michigan as six point favorites. Who do I like? I’ll side with Michigan and a seven point victory.

I just want to say the Clemson and Georgia game was a great watch for such a low scoring football game, ending in a Georgia 10-3 victory.

If you appreciate defense like I do it was must-see television.

What a great game between two college football heavy weights.

The Fed-Ex Cup winner of $15 million was Patrick Cantlay. Patrick defeated Jon Rahm in an exciting fashion as it came down to hole 18 to decide the winner. I am not a fan of the staggered scoring system where players start a certain number under par. I wish they would change the format. How about the fact that Cantlay won more on this tournament then he has the entire time he has been on the PGA Tour? A nice chunk of cabbage scooped up by Patrick on Sunday!

The NFL season kicks off on Thursday night with the Tampa Bay Super Bowl champs taking on the Dallas Cowboys. I think Tampa Bay smokes the Cowboys by two touchdowns.

The Lions open up at home with the San Francisco 49ers as a touchdown underdog. I see a large San Francisco victory on Sunday afternoon. I can be reached at thefatguy@mihomepaper.com.

Let’s roll out the picks for the NFL and week one: