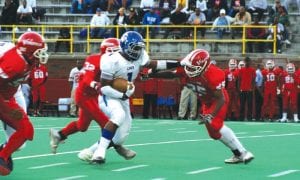 High school football players will be guided by several different rules for the 2013 season.

EAST LANSING — Approximately 110,000 student athletes will begin practice in eight sports in which Michigan High School Athletic Association (MHSAA) sponsors post-season tournaments next week, signaling the beginning of the 2013-14 Fall sports season. There are several significant rules changes on football for 2013 and one on soccer that fans may want to become familiar with:

• If a player’s helmet comes off during a play, it is illegal participation and a 15-yard penalty if that player continues to participate in a play; and a personal foul and a 15- yard penalty if a player from the opposing team initiates contact with a player whose helmet has come off.

• Following a penalty on the kicking team for kick catch interference on a fair catch play, the receiving team can opt to take a free kick after the 15-yard penalty has been enforced.

In soccer, Michigan has adopted the National Federation rule involving the disqualification from a game when a player receives a second yellow card and the subsequent red card. Now, in addition to the player being ejected from the contest, that team will have to continue the game a player down. A player receiving a yellow card must leave the game immediately, but now may reenter at the next available opportunity, and no longer have to sit out for 10 minutes. There are no substantial rules change in other fall sports.

Practice sessions begin on Monday, Aug. 12 in football, followed by all other sports on Wednesday, Aug. 14. Practice in football must begin on Aug. 12 for all schools wishing to begin regular season games the weekend of Aug. 29-31. Schools must have 12 days of preseason practice at all levels before their first game, which may not occur before 16 calendar days. All football schools must also conduct at least three days of practice before beginning contact, and those sessions may not include any pads.