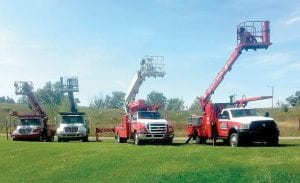 FLINT TWP. — Signs by Crannie cut the ribbon on its new 52,000-square-foot facility on Thursday, September 10, highlighting the completion of the company’s major investment project while marking its 30th year in business, according to a press release.

The $2 million facility, located on a 3-acre parcel at 4145 Market Place near Bishop Airport, employs 46 people who design, construct, install and service commercial signs throughout the U.S. and Canada.

Clients, dignitaries and other guests were treated to a barbeque lunch and a tour of the state-of-the-art facility, which includes an atrium with a 20-foot ceiling to exhibit samples of the company’s work.

“I believe that the values my dad taught me, like honesty, integrity and hard work, are the foundation of a successful business,” said Crannie. “These are the values I learned while growing up in Flint, and I’m proud to be back in the center of the Flint area where I started.” 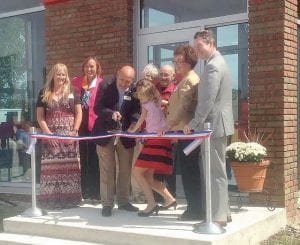 Dan Crannie is joined by Flint Township Supervisor Karyn Miller (second from left) and other local officials for the ribbon cutting of his relocated business on Market Place.

Miller said that she is “pleased to welcome Crannie back to Flint Township. I share in the excitement of celebrating Signs by Crannie’s growth and expansion, and the opening of their new facility near Bishop Airport. Everyone driving or flying by will be able to see their bright red sign, displaying what they do best! Congratulations on 30 years, and thank you for choosing to invest in Flint Township!”

“Dan has shown great leadership, both in terms of growing his company and in being an outstanding ambassador of the business community,” said Karcher. “His leadership extends to community projects and other philanthropic efforts.”

The company has experienced considerable growth over the last few years, as the number of local employees has grown from 30 to 46. Several more jobs could be added by the end of the year, said Crannie. Meanwhile, the new plant is more than three times the size of the 17,000-squarefoot facility in Flushing where the company was based for several years after previously moving out of its first Flint Township location on Flushing Road.

Crannie opened Signs by Crannie in 1985; using skills he had gained hand-painting signs for Hamady Bros. grocery stores. Since then, he has grown from a one-person operation to more than 50 employees at locations in Flint Township and Fort Myers, Fla. The company has built signs across the Midwest, as well as delivering signs to Germany, France, Portugal, Venezuela and Brazil.

In addition to operating his business, Crannie partners with other businesses and organizations, including the Flint & Genesee Chamber, to promote education and career opportunities in manufacturing. — R.S.